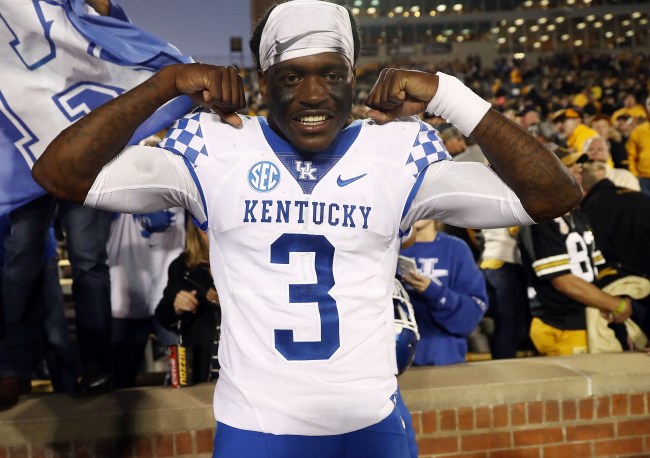 Former Kentucky quarterback Terry Wilson may have moved on from the Wildcats’ program for his final year of collegiate eligibility, but he is not forgetting his roots. Wilson recently paid homage to Jared Lorenzen with some amazing custom cleats.

Wilson, who is preparing for upcoming NFL Draft workouts with the Greg Panelli Passing Academy, got in his first day on Thursday. When it was time to take the field, he laced up a pair of cleats that honored Lorenzen, who passed away in 2019.

Lorenzen, often known by his nickname ‘The Hefty Lefty,’ played quarterback at 6-foot-4, 285 pounds. While in college at Kentucky, he set school records in total offense, passing yards and passing touchdowns before playing three years with the New York Giants.

Wilson, who played quarterback at Kentucky and went 17-8 as a starter, is the only player in school history with at least 3,000 passing yards and 1,000 rushing yards. He started three seasons for the Wildcats and obviously knew of the legend that is Lorenzen.

When The Hefty Lefty died in 2019, Wilson gave him a salute on the field. Not only did he wear the cleats that he sported in training on Thursday, but he wore No. 22 in the team’s season opener.

Now, as he gets ready for the NFL, he is channeling one of the greats to come before him.

After finishing his eligibility at Kentucky, Wilson transferred to New Mexico for 2021. He completed 99-of-172 passes for 1,055 yards and seven touchdowns but did not play after Oct. 9, when he suffered a dislocated elbow on his non-throwing arm.

Wilson’s draft stock is not likely to fall in the first few rounds, an NFL team looking for an absolute athlete at the quarterback position could take a late-round flier.