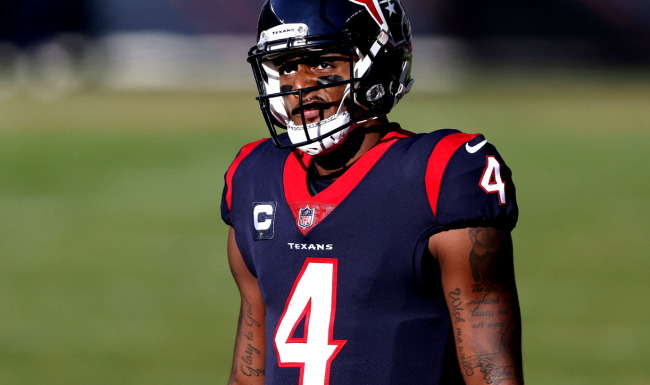 Deshaun Watson’s name was back in the news on Monday after the Cleveland Browns cut fifth-string quarterback Josh Rosen.

The Browns obviously feel that Jacoby Brissett, Kellen Mond and Joshua Dobbs are good enough to bridge the gap now that there are only seven more weeks until they get back the services of their controversial $230 million quarterback.

While all of that was going on, Watson’s former team, the Houston Texans, also made a move that brought the suspended QB’s name back up in conversation among NFL fans.

The Houston Texans, who got their first win of the season by beating the Jacksonville Jaguars for the ninth straight time on Sunday, are now in the midst of their bye week.

So, to keep the cashiers at the Houston Texans’ Team Shop at NRG Stadium busy this week they are offering 44% off a new jersey if fans want to exchange select former players’ jerseys.

As an added bonus, the Texans are not limiting this new deal to just Deshaun Watson jerseys. Texans fans can also trade in the jerseys of select Texans players originally acquired during the 2017 to 2021 seasons. (Watson was drafted in 2017.)

That little caveat means Houston football fans won’t be able to swap their J.J. Watt jerseys or the jerseys of other former Texans like DeAndre Hopkins or David Carr.

That means if you want a new jersey with a current player’s name and number on it before Deshaun Watson and the Browns visit Houston on December 4th you better get moving, as in visiting Houston or else you’re sh-t out of luck.

Perhaps if there were more promotions similar to this by major sports teams the burning of high-dollar jerseys will cease? Yeah, probably not. Especially based on several of the comments on Twitter.

Me looking for my 4 jersey at the landfill pic.twitter.com/L6qWQR7NB1

“I knew this would come right after i threw mine away,” someone else replied.

Believe me when I say I won’t be parting ways with my Brandon Weeden Texans jersey!!

“Finally I can get rid of my Barkevious Mingo and Senio Kelemente jerseys,” another Texans fan tweeted.

“What about fans outside of the state, you idiots? How did you mess up something so simple that should of been done already?” another fan wrote, echoing the sentiments of many others on Twitter.

I donated mine, its in Ghana now.