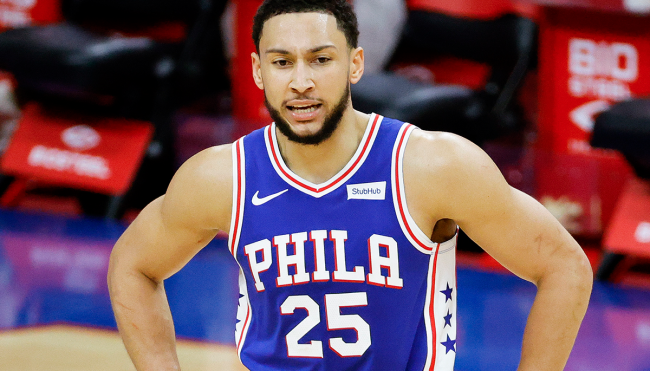 A couple of years ago, experts published an incredibly uplifting academic paper warning society as we know it could collapse by the time 2050 rolls around due to the impact of climate change. However, we might have to push the date of that apocalypse up a bit thanks to what unfolded in Philadelphia after the 76ers were eliminated from the playoffs by the Hawks on Sunday night.

After spending almost a decade being told to Trust The Process, it would appear more than a few fans officially had their faith eroded when the team dropped Game 7 of the Eastern Conference Semifinals to Atlanta by a score of 103-96. While there are plenty of scapegoats for them to pick from, the bulk of the criticism has been directed at Ben Simmons, who was called out by Doc Rivers and criticized by Joel Embiid for inexplicably passing up an open dunk at a crucial moment in the contest.

Simmons has spent the past few seasons serving as a role model to kids who dream of being picked first in the NBA Draft and winning Rookie of the Year without possessing the ability to hit a jump shot. Plenty of people have spent years holding out hope it might only be a matter of time until he manages to fix his game, but as things currently stand, it appears he’s going to need the AND1 mascot to give him $5 so he can buy one.

Based on what unfolded in the wake of the loss, that’s about $5 more than a lot of people would be willing to shell out for a Simmons jersey right now, as it didn’t take long for disgruntled owners to burn the ones already in their possession by chucking them on the grill and casting them into a fire pit.

Philly fans are a treasure 😂😂

On the bright side, it’s not like the 76ers are locked into a massive contract that would force them to pay Simmons tens of millions of dollars on an annual basis in the coming ye—