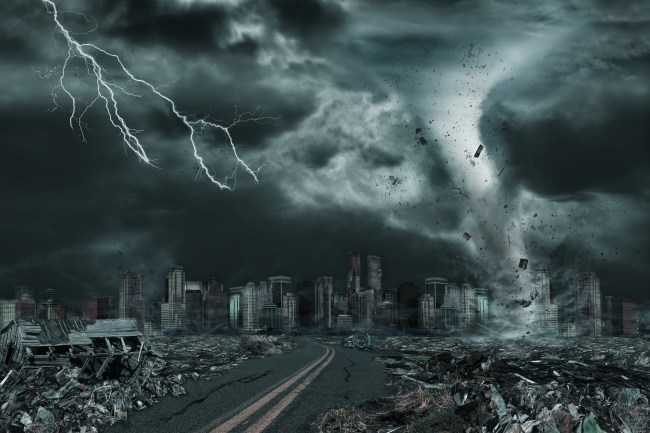 The Doomsday Clock (probably) moved a tick closer to midnight after a new report was published that heralds the complete collapse of human civilization as we know it all within the next 31 years.

The report put forth a plausible scenario where the current state of human civilization will cease to exist by the year 2050 due to the devastating (and preventable) effects of climate change. This report is calling for a rapid “World War II emergency mobilization” in order to reverse these effects as it states we are reaching the ‘point of no return’.

This report has already been spread far and wide on social media. Probably because it’s going with the ‘we’re totally fucked within the next few years’ angle. VICE News breaks it down:

The paper argues that the potentially “extremely serious outcomes” of climate-related security threats are often far more probable than conventionally assumed, but almost impossible to quantify because they “fall outside the human experience of the last thousand years.”

On our current trajectory, the report warns, “planetary and human systems [are] reaching a ‘point of no return’ by mid-century, in which the prospect of a largely uninhabitable Earth leads to the breakdown of nations and the international order.”

The only way to avoid the risks of this scenario is what the report describes as “akin in scale to the World War II emergency mobilization”—but this time focused on rapidly building out a zero-emissions industrial system to set in train the restoration of a safe climate.

The scenario warns that our current trajectory will likely lock in at least 3 degrees Celsius (C) of global heating, which in turn could trigger further amplifying feedbacks unleashing further warming. This would drive the accelerating collapse of key ecosystems “including coral reef systems, the Amazon rainforest and in the Arctic.” (via)

What’s pissing me off about this report, and I know you were wondering about that, is that it’s essentially signaling the complete collapse of mankind despite there being worldwide initiatives to stop this from happening. There are only a handful of dipshits on the planet who still refuse to recognize that things are rapidly changing (1 million species are at risk of extinction!) and countries across the planet are making necessary changes.

They even scale it back the ‘we’re all totally fucked by 2050’ rhetoric with a call to action:

“A high-end 2050 scenario finds a world in social breakdown and outright chaos,” said Spratt. “But a short window of opportunity exists for an emergency, global mobilization of resources, in which the logistical and planning experiences of the national security sector could play a valuable role.” (via)

So why not call this what it is? It’s an alarmist projection of the future, based on facts, that is a call to action for change before these predictions come true. We know that the globe is getting warmer every single year. Storm are getting larger, more violent, and more unpredictable. There’s a drought in Florida (which should be flooded this time of year) while the Midwest is underwater.

I don’t get why this is suddenly the report that everyone’s supposed to acknowledge when anyone with two eyes who follows the global news can plainly see that things are fucked all over.

For more on this, you can click here to visit VICE News or you can access the report here.