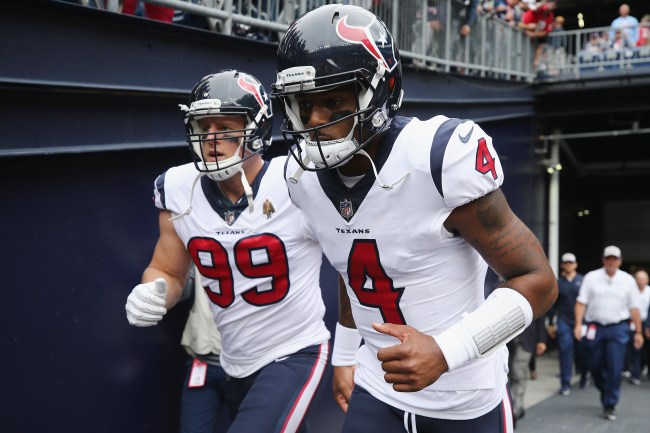 The situation in Houston between the Texans and Deshaun Watson is deteriorating rapidly and it appears that no head coach wants to go there because of the toxic environment.

For the past week, Watson has grown unhappy with the Texans owner Cal McNair for ignoring his recommendations for coaches during the team’s hiring process.

Per a source with knowledge of the situation, Watson recommended not only Chiefs offensive coordinator Eric Bieniemy for a head-coaching interview but also former 49ers defensive coordinator Robert Saleh. The Texans during the first week after the regular season ended made a request to interview neither.

Watson’s recommendations came at the invitation of owner Cal McNair, who decided to involve Watson in the process. Watson suggested Bieniemy and Saleh after talking to other players around the league, and after consulting with Watson’s Houston teammates.

From Watson’s perspective, the failure to interview these candidates made no sense, given that the Zoom interviews by video conference are easily arranged and executed.

According to ESPN’s Adam Schefter many around the league are under the belief that Watson has played his last snap in Houston.

There is a growing sense from people in and around the Texans’ organization that Deshaun Watson has played his last snap for the team. It’s early in the off-season, there’s a lot of time left, but Watson’s feelings cannot and should not be underestimated.

It seems like Texans will be without their franchise QB next season and will lose out on hiring elite head coach because of all the drama behind the scenes.