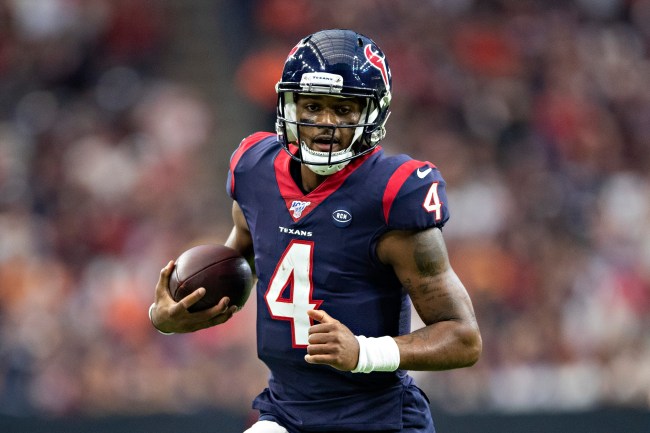 It appears that Deshaun Watson is dead set on forcing his way out of Houston after his relationship with team Cal McNair is deteriorating.

According to a report from Sports Illustrated’s Greg Bishop and Jenny Vrentas, Watson was furious the team didn’t interview Chiefs’ offensive coordinator Eric Bieniemy despite his recommendation. Watson was also found McNair to be “patronizing” when he said he “understood his point of view before meeting with candidates” during a recent press conference.

An estranged QB, direct pleas to players and the spread of misinformation: The two weeks of chaos following a forgettable Texans season (with @GregBishopSI & @GGramling_SI) https://t.co/UCtDBVN7mP

While on vacation Watson learned, according to the two sources, the franchise that said it wanted his perspective had not yet asked to interview Bieniemy (they would, on Jan. 12, two days after the initial interview window for Bieniemy had closed, and only after the firestorm that followed the Caserio twist in the franchise’s ongoing saga). Watson was further upset by the press conference that McNair held with Caserio, in which the owner said he had read reports that Watson was unhappy but noted he had met with Watson several times and “understood his point of view before meeting with candidates.” Watson found this response, according to another of the sources close to him, to be “patronizing.

Apparently, Watson has already decided that he wants out because of Jack Easterby’s power within the organization and his teammates support his decision.

On Tuesday, Andre Johnson, the lone member of the franchise’s Ring of Honor, posted on Twitter that Watson should stand his ground, writing that “nothing good has happened” since Easterby’s hire. When Watson saw the tweet, the first for a person of Johnson’s significance to name Easterby directly, he laughed. Asked why he might find a tweet that heavy in sentiment funny, one of the people close to Watson says, “He just wants out.”

Many players, according to the same sources, felt the same way as Watt—and support Watson’s doing what’s best for himself moving forward.

Earlier this week ESPN’s Chris Mortensen reported that Watson would consider lifting his no-trade clause if he would were dealt to Miami.

Reports about Deshaun Watson's unhappiness with @HoustonTexans are accurate and sources close to the QB say he is still angry about team's insensitivity to social justice, including hiring practices, after the franchise failed to interview Chiefs OC Eric Bienemy this past week.

Sources say Watson could play hardball with Texans about a trade. His new $156 million contract includes a no-trade clause but informed speculation from a source is that he would consider the @MiamiDolphins in which Tua Tagovailoa and additional compensation goes to Houston.

Trading Watson would be complicated because the Texans’ asking price is going to be insanely high but we’ll have to wait and see what happens in Houston.