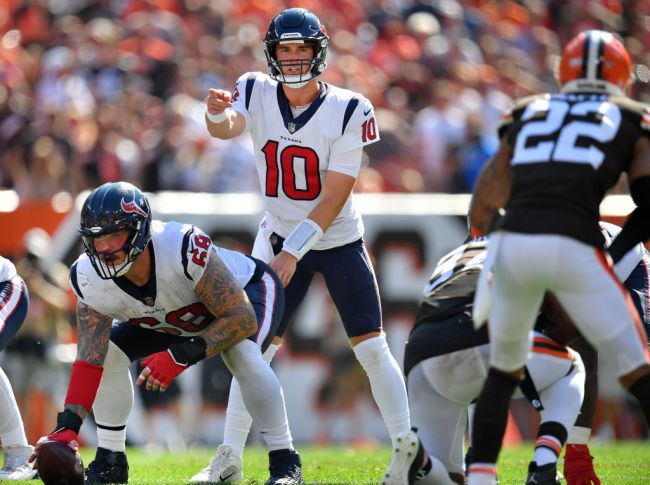 Texans rookie quarterback Davis Mills got a strong ‘welcome to the NFL’ on Sunday. The 22-year-old out of Stanford was called into action during the second half and got absolutely rocked.

Mills, who stands 6-foot-4, 225 pounds, has a lot of promise. He skyrocketed up draft boards during the spring and was selected in the third round of April’s NFL Draft.

Despite his potential, he is not ready to be a starting quarterback in the league just yet. That was very clear when he was forced to take over in the second half against the Cleveland Browns.

Facing a 10-point deficit, Mills led Houston into the redzone with just over two minutes and 30 seconds remaining in the game.

He dropped back on second down and looked to pass, but he didn’t see the defender running free from his right side. Like, he didn’t see him at all.

Not sure I've ever seen a quarterback less aware of an impending sack, man. pic.twitter.com/yjE7jItvkL

The Texans were able to recover the football but could not find paydirt and lost by 10. It is unclear as to what the team plans to do at quarterback moving forward, especially if Taylor is out long term, but if Mills gets the nod, he will have to be more aware.

After today, the rookie’s Madden awareness rating is a hard, solid 0. Ouch.