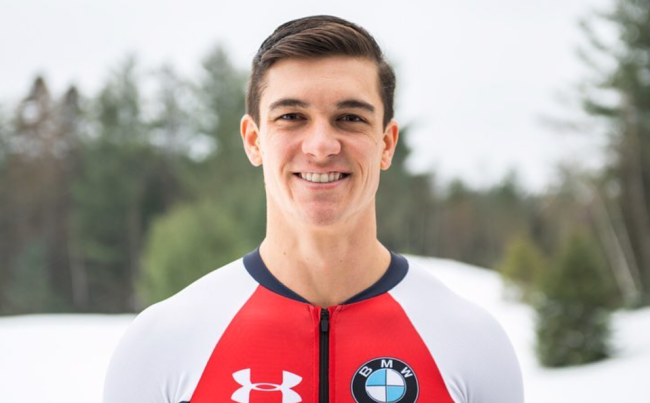 Around this time in 2016, Boone Niederhofer and his Texas A&M football teammates were gearing up for a bowl game against Kansas State. Now, four years later, the San Antonio, Tex. native has his sights on the 2022 Olympics. The 27-year-old Aggie alumnus was named to the U.S. men’s national bobsled team on Monday as one of the 11 athletes announced to have made the cut prior to the crucial qualifying seasons.

Niederhofer’s path from Texas football to a niche winter sport is unconventional. He was the star receiver for Churchill High School but received just one scholarship offer to compete on the FCS level in college. Instead of playing for a small school, he followed his dream and walked on at Texas A&M, playing on the scout team as a freshman and earning a scholarship as a sophomore. Throughout his four years in College Station, he made 35 total catches for 327 yards and one touchdown in a limited role and became a fan favorite with his team-first mentality and sideline antics. A true glue guy, if you will.

He accepted a job in Houston after graduation but a company buyout left him unemployed after about 18 months. One of his former Aggie teammates reached out to him shortly thereafter and convinced him to try bobsledding. Niederhofer and Sam Moeller teamed up to form a two-man team and had the opportunity to compete overseas and get experience in Austria, Switzerland and Germany. As the pilot, he drives the sled.

“I had just recently gotten let go in a company buyout. I was in the middle of a job search and then Sam reached out to me,” Niederhofer said. “It was something that I hadn’t really even considered at all. Get a couple weeks down the road and I talk to the bobsled coach. The ball starts rolling and I start trying to train again.”

The rookie bobsled team competed overseas and gained experience in Austria, Switzerland and Germany before COVID-19 shut down the season. In each event, the duo posted top 10 push times everywhere they went in fields of 40 or more.

When the pandemic hit, Niederhofer was forced to get creative with his training. Bobsled is not an easy sport to just move away from a track, so he had to recreate situations and body angles through weighted backpacks, different types of resistance training and using the hills of San Antonio for sprint training. To qualify for the USA team, he traveled to Lake Placid for Team Trials last week. Team selection saw athletes compete in a series of two two-man races and two-four man races. Niederhofer was part of USA-2, which finished second with two runs of 55.51 and 55.92 seconds, respectively.

The United States has not sent team members overseas to compete in the first half of the international circuit, but plans to send athletes to start the second half of the season in Winterberg, Germany. Niederhofer will compete alongside a team of nine other Team USA members and look to qualify for the 2022 Olympics over the next two seasons.