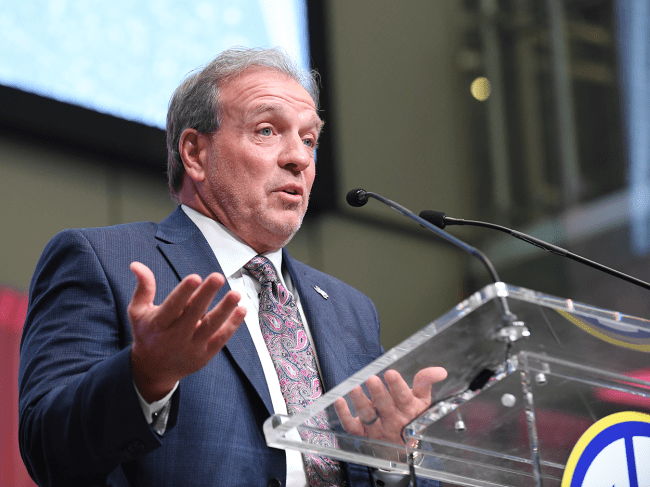 Texas A&M football is coming off of the most successful recruiting year of all-time. Literally. The Aggies signed nine five-stars, 19 four-stars and two three-stars in the Class of 2022 which was the highest-ranked class in history.

However, head coach Jimbo Fisher has been very adamant that Name, Image and Likeness opportunities had nothing to do with the class.

So then what did? Why are many of the top recruits in the country choosing to play for a program that has not won more than 10 games since 2012 and is coming off of an 8-4 season?

During an appearance on The Herd, Colin Cowherd asked Fisher to sell him on why he should play at A&M instead of at Texas or elsewhere. The 56-year-old head coach gave his pitch in response but it was not particularly easy to track and full of inaccuracies.

.@ColinCowherd: I'm a recruit. Sell me on Texas A&M@AggieFootball Coach Jimbo Fisher: Do you want to go somewhere that hasn't won a championship or do you want to be the first to do it? Those are the ones that have statues outside pic.twitter.com/hNgnm3Lf5g

First and foremost, Fisher talks insanely fast. He is not particularly easy to track, so sometimes things get lost in the shuffle, but for the most part, his pitch was comprehensible.

Fisher then goes on to discuss the resources at A&M, including a brand-new $160 million facility, an SEC schedule, coaches who have won a national championship, the size of the alumni base, and their big financial donations. He also mentions that Texas A&M has coaches “who try to put as many players in the NFL as they can,” which is certainly something, considering that is the case at every school in the country. It sounded like he started a sentence but did not know where to go with it.

From there, Fisher talks about how Texas A&M allows the opportunity for players to come in and be the first to win a national championship.

This appears to be his big sell. Recruits who have yet to set foot on campus can go to school in College Station and set the standard.

To close, Fisher talks about the commitment that Texas A&M gives to the student-athletes after they graduate.

All-in-all, he has it down to a science. Fisher has made that pitch countless times over the last five years and, seeing as NIL “doesn’t have anything to do” with the Aggies’ success on the recruiting trail (*major eye roll*), it is really working. All of that is fine and dandy but he should probably get his facts straight about academics.