Texas A&M Has Changed Its Locker Room Code To 50-7 After Blowout Loss To LSU, Which Seems A Little Over The Top 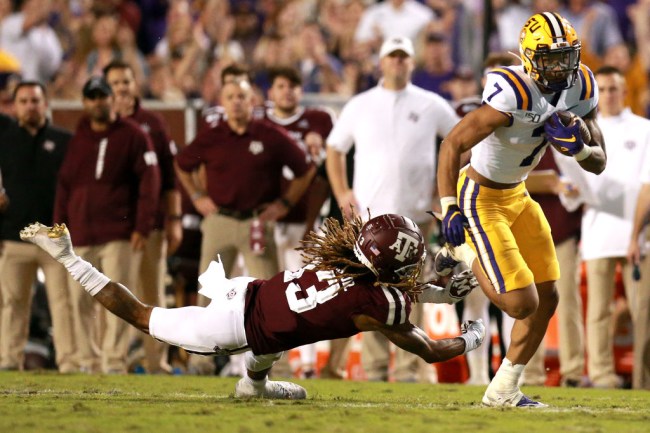 You would think that Texas A&M would want to immediately throw its performance against LSU in the trash and forget about the 50-7 scoreline, but that isn’t the approach Jimbo Fisher and the Aggies are taking.

The Tigers simply showed out against Texas A&M in the regular-season finale. LSU held the Aggies to just 169 total yards of offense and forced three turnovers while Joe Burrow and the Tigers hung 50 on them. It was a bad, bad day in Aggieland, but A&M wants to remember that awful feeling.

One way to do that is to not forget about that final score so apparently, they have changed the code to their locker rooms and other buildings to 50-7.

“We’re definitely going to keep that LSU taste in our mouth so we can come back hungry,” junior wide receiver Jhamon Ausbon said according to The Eagle.

“It’s all around our locker rooms: The score’s the code to get in our locker rooms and our building,” Ausbon said. “It’s hard not to think about it, and so that’s the goal: We want everybody to remember that and keep that taste in our mouth.”

That’s certainly one way to do it. It seems a little over the top to pull this sort of motivational strategy out in college at an SEC West program, but then again, LSU has won eight of the last nine against the Aggies.

If changing the code to the locker room to remind the players and staff the ass-kicking they all took from the Tigers last season serves as a little extra motivation throughout the year, there’s certainly no harm in it.

Then again, it sounds like something you’d hear a high school program pull off.

It’s also worth pointing out that everyone on campus now knows the code to athletic facilities and locker rooms on campus, so that’s a thing.