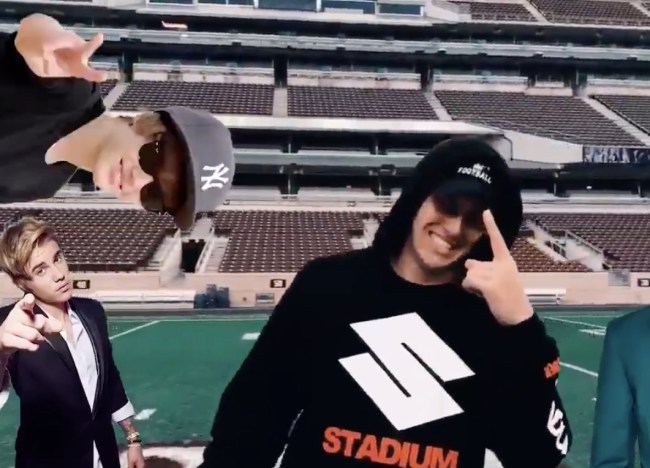 Texas A&M has a lot of reasons to be optimistic about their future. They’ve got a new coach in Jimbo Fisher, a coach that won the 2013 National Championship with FSU. The school has badass athletic facilities which play well in recruitment.

Their future is generally looking bright. The one dark spot on the horizon? The Aggies’ QB Nick Starkel is desperately trying to get on The Ellen Show to meet Justin Bieber during his Spring Break and he’s so committed to meeting Bieber that he’s put together a video for Ellen DeGeneres which shows all the reasons he should meet J.B…This isn’t a joke. The guy’s apparently just a huge Belieber and he’s leaning into that fandom.

Nick Starkel tweeted this video at the Ellen Show over the weekend in an attempt to get on the program and meet Bieber during Spring Break. The Twitter video has already been viewed over 200,000 times:

Over in a Reddit thread on r/cfb you have some bewildered fans saying things like ‘this guy must have lost a bet’ to which Texas A&M fans respond ‘No, he is a huge fan of Bieber. He wears a Bieber shirt during warm ups.‘

Listen, Justin Bieber drops bangers. The dude knows how to drop Summer party anthems at least once a year (anyone remember the ‘Despacito’ remix?). But this is eerily reminiscent of QB Tim Tebow spending his Spring Break circumcizing babies in The Philippines. You see this and wonder ‘why is this QB spending their Spring Break like this?’ At least in Tebow’s case, the guy was on a mission trip. The Aggies’ QB just wants to use his vacation to meet Justin Bieber…Good luck next season, Aggies.