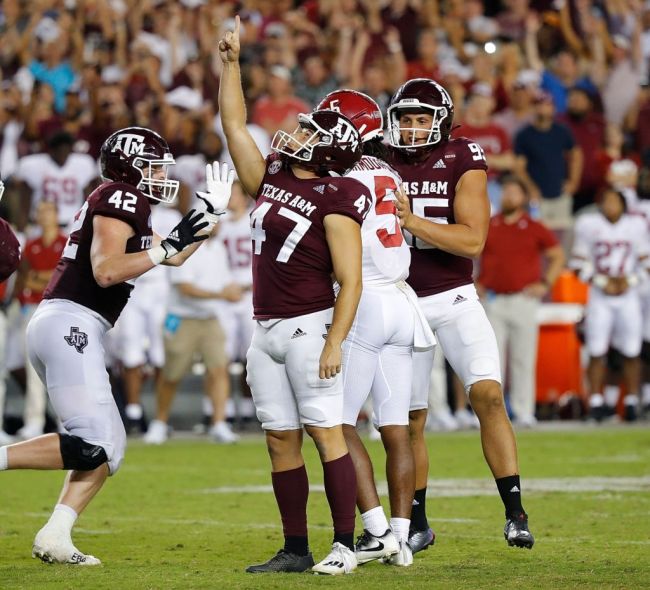 Unranked, 3-2 Texas A&M entered Saturday’s game against No. 1, undefeated Alabama as 17.5-point underdogs. Nobody gave the Aggies, playing with their backup quarterback, a chance.

And yet, as the first quarter came to a close, the home team held a 17-7 lead in front of the second-largest crowd in Kyle Field history. However, Alabama did its best to stage a comeback and nearly did just that.

The game was tied with 2:08 remaining and the Aggies had to lead an eight-play, 54-yard drive to set up the game-winning field goal. With two seconds left, kicker Seth Small trotted out to attempt a 28-yarder.

As the weight of snapping Alabama’s 19-game winning streak fell on his shoulders, Small put his boot to leather and knocked it in. The kick looked like it was veering left off of the foot before it curved back inside the left upright.

THE AGGIES UPSET NO. 1 ALABAMA. pic.twitter.com/p68Rj1KKwG

While the fans stormed the field, Small lifted one finger and pointed to the sky. He is forever a legend in College Station.

As nerve-wracking as it was for everybody watching, nobody in or out of the stadium was more emotional than Small’s family. A&M videographer Cam Worthy (BIG ups to Worthy) captured the incredible moment from the perspective of his family and it will give you goosebumps.

Seth Small’s family watching him nail the game winning field goal vs Alabama. One of my favorite shots of the night. @12thManP pic.twitter.com/88cUgkcnyi

What a moment. What a shot. All of the feels.

The woman in the front row, who is probably Small’s mom couldn’t even watch. Her eyes were closed through the entire kick and she was praying to the good lord with everything that she could for that ball to go through the uprights.

Also, shoutout to the blonde girl in the “GAME ON” shirt. Perhaps she is Small’s sister? Girlfriend?

Either way, she had barely even gathered her emotions before hopping over that wall to, presumably, be the first to Small.

We all need a support team like “GAME ON” girl and Small’s family.