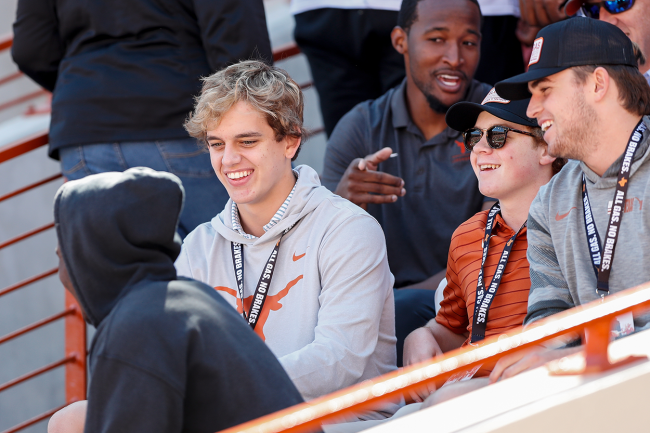 Arch Manning is the biggest name in college football recruiting since, well, his uncles Peyton and Eli. As the grandson of the first family of football, the top-ranked player in the Class of 2023 has eyes on his every move.

With his senior football season quickly approaching, Manning is not too far away from making a decision. Technically, he has until the Early Signing Period in December or National Signing Day in February, should he choose to wait.

Although a timeline has not been set, the general belief is that he will make an announcement at the end of the summer.

In the meantime, Manning is making his official visits. He was at Georgia to begin the month, at Alabama last weekend and is at Texas this weekend.

The Longhorns not only hosted Manning, but a large number of highly-ranked prospects.

Among them was four-star safety Mikal Harrison-Pilot, who may or may not have said that the nation’s No. 1 overall recruit made his decision.

Texas edge rusher Derrick Brown went live on Instagram during the recruiting dinner on Saturday. He flipped the camera to Harrison-Pilot, who said something about Manning’s commitment. The audio skipped halfway through and it’s hard to discern exactly what he said.

However, Harrison-Pilot likely said one of two things:

Take a listen for yourself:

Now, it seems likely that it is the second of two options. Harrison-Pilot commented on the video and the comment was pinned.

I think it’s because it skipped pic.twitter.com/zLCTFzjExf

Either way, Texas received a commitment from Manning’s top high school target and best friend on Sunday. While their recruitments are not tied to one another, it is possible that Will Randle’s decision could be another domino to fall for the Longhorns that leads Manning to join them in Austin.

Something in the orange. #commited 🤘🏻 pic.twitter.com/ah7C8VDhki

If that comes to fruition — if Manning commits to Texas — Mikal Harrison-Pilot is going with him.