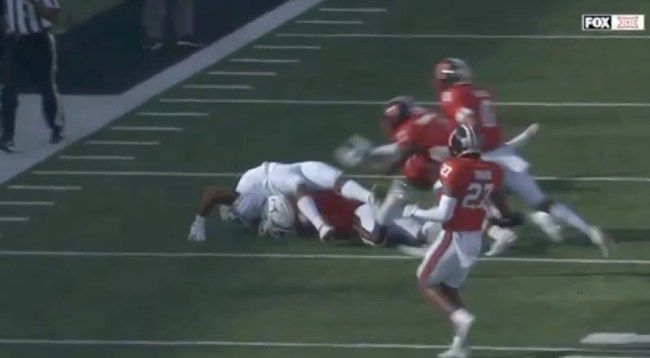 Whenever a player makes the decision to hurdle a defender, it’s a risky move as the negatives far outweigh the positives. The only real positive if you jump over another human is that you’re going to go viral for about 12 minutes. The negatives can be you going viral for having another player’s helmet hit you below the belt, you possibly fumble, and you show the world you don’t have the vertical you think you have.

Texas running back Bijan Robinson, a true freshman, caught a pass out of the backfield against Texas Tech on Saturday and went with the hurdling over the defender move. It did not work out well. One Red Raider defender flipped him while another hit him squarely in the back to contort his body into an extremely scary position.

It’s incredible that he got up after this play. He appeared to be just fine after taking the spill.

Bijan Robinson shows you what can go wrong on the hurdle. pic.twitter.com/whXJLyG2tU