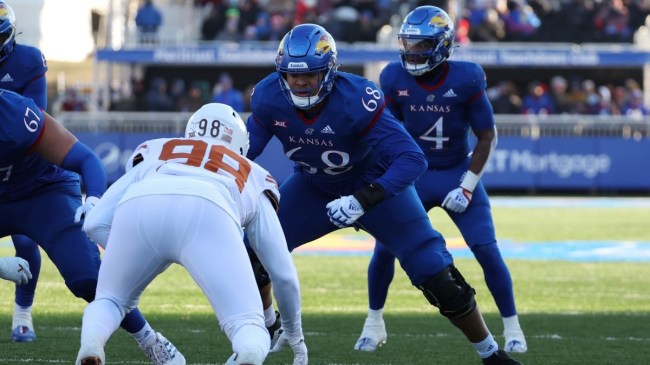 The Kansas Jayhawks and head coach Lance Leipold have had a memorable 2022 college football season. Prior to the season, the Jayhawks had not qualified for a bowl game since 2008. In fact, they had not won more than three games in a season since 2009.

But this year has been different. Leipold led Kansas to a 5-0 start and even convinced ESPN’s College GameDay to come to Lawrence for a showdown with TCU over the Red River Shootout between Texas and Oklahoma.

But now the Jayhawks and Longhorns are on the same side. Kansas is already bowl-eligible at 6-5 entering Saturday’s rivalry game with 8-3 Kansas State. But the Wildcats are one win away from a trip to the Big 12 championship game against TCU. Should Kansas knock off Kansas State, however, the Longhorns would get a second crack at the Horned Frogs.

So all of Longhorn nation is pulling for the Jayhawks on Saturday night, and Kansas needed to lay down some ground rules for the occasion.

Welcome to the chat, Texas fans.

Two simple ground rules tonight:
1. No horns up emojis
2. You say Rock Chalk when we tell you to

The rules for Texas fans were simple:

2. You say Rock Chalk when we tell you to.

The Longhorns seemed happy to oblige as long as the Jayhawks took care of business.

2. Thank you for acknowledging it as the horns up emoji 😊

And the Jayhawks seemed willing to negotiate, if only a little.

2. We’ll give you what’s yours

Friends for the night?

Texas finished the regular season at 8-4 after a 38-27 victory over Baylor on Friday. Should the Longhorns get into the Big 12 title game, they’d be playing for the conference’s automatic big to the Sugar Bowl. TCU, meanwhile, remained undefeated at 12-0 with a 62-14 drubbing of Iowa State on Saturday. The fourth-ranked Horned Frogs control their own future with regard to making the College Football Playoff.

It would mark the first College Football Playoff appearance for the program in its first season under new head coach Sonny Dykes. Dykes joined the Horned Frogs from SMU in the offseason.