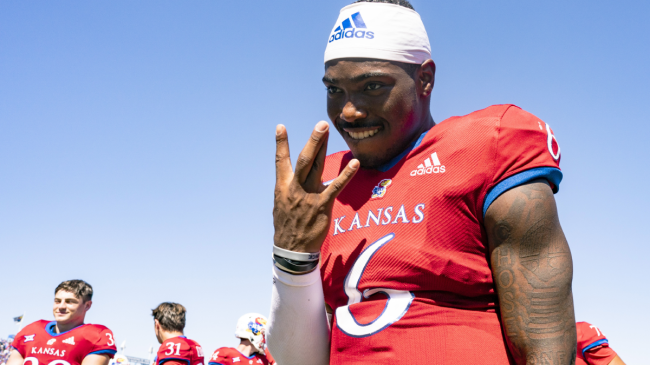 The Big XII is as unpredictable as ever before, and the chaos that’s taken place over the first five weeks of the season can be summed up by College Gameday’s most recent location announcement.

The ESPN set will be in Lawrence, KS this weekend as the No. 19 Kansas Jayhawks host the No. 17 TCU Horned Frogs. Yes, you read that right.

Kansas is off to one of its best starts in program history, winning its first five matchups. Those victories include triumphs over Iowa State, Duke, Houston, and West Virginia. The five wins mark the most the program has had in over a decade, and we’re not even halfway through the college football season.

As for TCU, the Horned Frogs are fresh off a 55-24 shellacking of Oklahoma in which the offense racked up nearly 700 yards. Texas Christian also enters this matchup undefeated with wins over Colorado and SMU, too.

This is the first time College Gameday has ever made an appearance at Kansas, and those Jayhawks fans are sure to create a raucous atmosphere, but what’s more telling about the ESPN appearance is how far two Big XII blue bloods have fallen off this season.

This weekend also happens to mark the annual Red River Rivalry between Texas and Oklahoma. If someone told you before the season started that College Gameday would be showing up to a Big XII game this week, 99% of folks would’ve circled this matchup.

Instead, we get a nice changeup, but it shows how bad the two blue bloods have played thus far.

Oklahoma finds itself on a two-game losing streak, losing to Kansas State and TCU in back-to-back weeks. That puts the Sooners in dead last in the conference standings.

Texas, meanwhile, put up a fight in a close loss to Alabama, but they’ve since lost to Texas Tech, too. The 2022 Red River Rivalry marks the first time since 1998 that neither team enters the contest ranked, and only the third time it’s happened since 1968.

Fans were quick to react to seeing the annual showdown put on the backburner for Kansas vs. TCU.

Fans are already lining up their guesses for guest picker, a list that includes Rob Riggle, Paul Rudd, and Jason Sudeikis. We’ve seen Rob Riggle work with ESPN before, and everyone would love to see Jason Sudeikis AKA Ted Lasso on the set.

*slamdunk — getting the trio would be holy trinity dream

Am I missing anyone?

Who would you pick? pic.twitter.com/dtEYtJ6fYe

It should be a great matchup between the Jayhawks and Horned Frogs, but it’s a tough look for Texas and OU. They could be limping out of the Big XII when they finally make the jump to the SEC.