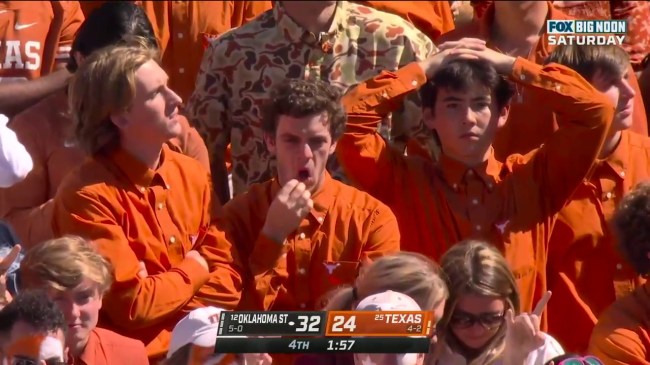 Stop me if you’ve heard this one— Texas football lost in devastating fashion.

Well, if you’ve heard it before, you’re going to hear it again because it happened again. The Longhorns held a 24-16 lead going into the fourth quarter of Saturday’s game against Oklahoma State and then proceeded to go scoreless in the final 15 minutes and lost.

Facing a one-point deficit with just over three minutes left, head coach Steve Sarkisian decided to go for it on 4th-and-1. The Cowboys defense held and forced a turnover on downs.

What a stand on 4th down by the @CowboyFB defense pic.twitter.com/hghuoWVwwX

Moments later, Oklahoma State running back Jaylen Warren broke loose from the backfield and set up a touchdown just before the two-minute warning.

There go that man🚀

Down eight with the ball, Texas tried its best to avoid the comeback loss. It could not and threw an interception.

Mike Gundy’s squad ran out the clock and left Austin with its sixth win of the season to remain undefeated. Texas fans were sad. Again.

As is tradition when Texas loses, the internet had a field day. And as is tradition, the Sam Ehlinger “we’re baaaaaack” video was everywhere.

GAME OVER IN AUSTIN. Sam Ehlinger, what do you have to say about Texas today? pic.twitter.com/XqOqov8Sgx

Hey Siri, snooze Texas Is Back reminder until September 2022.

Here are some of the highlights from the nationwide Texas troll fest:

OU and OSU fans when it comes to hating texas pic.twitter.com/XBfKyNSFho

Texas is now officially a colony of the kingdom of Oklahoma

It is a tough day for the Texas Longhorns, and therefore a great day for the rest of the world.

As Bob Stoops once said (as recently as this morning) HORNS DOWN!