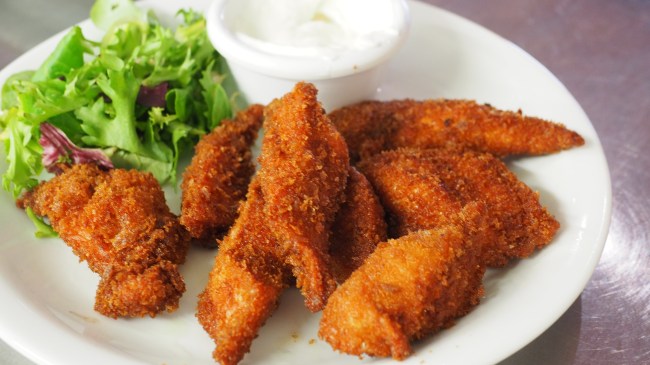 The Texas Rangers joined the rest of MLB yesterday with some Opening Day festivities as they hosted the Chicago Cubs and got walloped by a score of 12-4. While the performance on the field by the Rangers was less than stellar, there were still plenty of fans in the stadium who were more than happy with the ballpark experience. Why? Because they were housing $10 beers and $12 food from concession stands, obviously.

While there are plenty of wild food items at ballparks all around the country, the Texas Rangers might take this year’s award for the most unique. That’s because, instead of offering some boring old platter of six chicken fingers, the AL West team decided to combine all those things into one massive, two-pound, 18-inch-long tender called the FOWL POLE, get it? Just look at the monstrosity in all of its glory, courtesy of a tweet from Kari Steele of ABC 15’s, via Jared Sandler of FOX Sports Southwest.

Holy shite, can someone come serve that to me on a platter while I wear a king’s crown and feed it to me as if I’m royalty, because that thing looks insane. And with all that chicken blanketed over some waffle fries, hot damn, I’m salivating at the thought of putting that in my belly.

Admittedly, I have no clue if I’d be able to consume this FOWL POLE in one sitting, or, hell, even multiple sittings eating leftovers, but I’d love to f*cking try it while taking in a Texas Rangers came and tossing back a few Shiner Bock’s for good measure. Somebody, anybody, help me make this happen, because I’ll never be able to create this thing in the comfort of my own home and really just want an excuse to eat two pounds of chicken in one sitting. Something tells me my 5’9″, 162-pound frame wouldn’t be able to handle it.