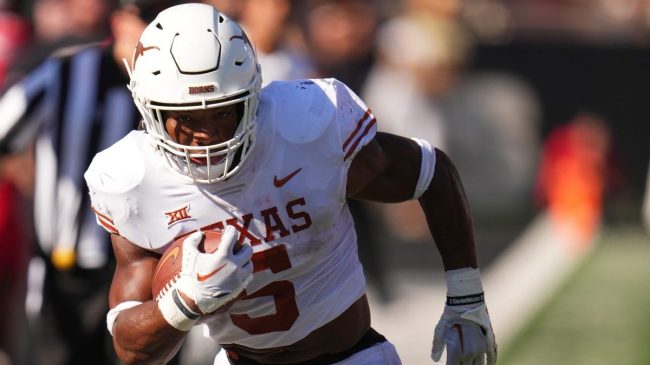 Texas running back Bijan Robinson is one of the best players in all of college football. He rushed for 1,127 yards and 11 touchdowns in 2021 and entered the 2022 season as a dark horse Heisman Trophy candidate.

Robinson’s stardom has only continued to grow thanks to perhaps the best NIL deal on the market.

But not everything has gone according to plan for the former five-star recruit. Robinson ran for just 71 yards in the Longhorns’ season-opening victory over Louisiana-Monroe and then just 57 yards in their loss to Alabama in Week 2.

He got on track with a dominant 183-yard, three-touchdown performance in Week 3 against UTSA, but that’s where his Heisman hype may just have peaked.

Texas took its second loss of the season to in-state rival Texas Tech on Sunday. While Robinson had a strong showing, rushing for 103 yards and two touchdowns on just 16 carries, one carry in particular will be hard for him to forget.

Robinson’s 16th and final carry of the game came on the first play of overtime when he fumbled. The Red Raiders recovered and went on kick the game-winning field goal.

The loss all but eliminates the Longhorns from College Football Playoff contention and Robinson from Heisman Trophy considerations. And now he’s doing everything he can to make sure he never fumbles again.

To his credit, Robinson owned the mistake and is taking action to keep from repeating it. Drastic action, at that. The star back carried a football all around campus on Monday to focus on ball security.

He even had to fend off some over-eager students who tried to punch it loose from his arms.

Texas RB Bijan Robinson said he’s been walking around campus and the football facility carrying a football today because he doesn’t want to fumble again. Said teammates tried to knock it out. Even a student on campus tried. He’s held onto it all day.

Texas fans seemed to appreciate the sentiment but believed it was entirely unnecessary.

Love this guy, but why? Guy is everything you could want in a teammate and player. I get it, but it’s not his fault we lost. Love that he probably thinks it is. Idc who you are a fan of, this guy is hard not to like.

Lol. No one was worried about the fumble. Isn't that his first or second in his career?

Others felt it was a bit too cliche…

Reminds us of this classic moment from The Program: https://t.co/eMYxqnvYyt pic.twitter.com/DKMYUAFJQe

when The Program comes to real life https://t.co/E99gsj7syS