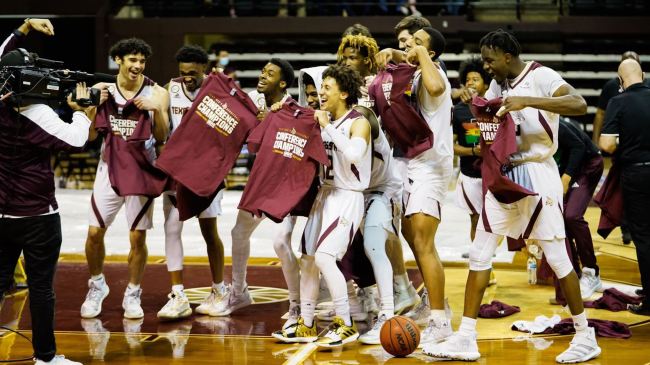 It’s been a strange year for college basketball, but even more bizarre for Texas State. The Bobcats had their former head coach resign in September after allegations of abuse and the program had to hire an interim coach just weeks before the season began. Terrance Johnson was tapped as the next head man less than a month before the first game of 2020-21 and was tasked with putting together a winning strategy and changing the culture of a program. It’s not an easy thing to succeed as an interim to begin with, but it’s even harder when the foundation needs to be rebuilt from the ground-up.

However, the celebration looked a little bit different. Johnson was unable to be with the team due to COVID-19 protocols and did not join the team in the locker room. So what did he do? Coach got in his car, drove to the stadium and surprised his guys from the isolation of his vehicle. The ensuing celebration is bonkers.

There were a ton of good moments to post, but none greater than this one. Shoutout to our leader @tjjohnson1010! #ComebackStrong #EatEmUp😼 pic.twitter.com/b30qeG4Bl8

Texas State will finish out its season with the second leg of a back-to-back against ULM before gearing up for the Sun Belt tournament next week. It is likely a one-bid conference so the Bobcats will have to stay hot and win the championship to reach March Madness. Whether they get there or not, Friday’s celebration is a reminder of why college sports are so awesome. That win meant everything to the program.