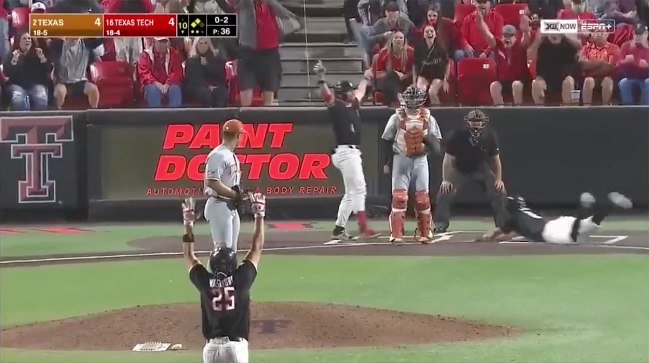 Texas Tech and Texas are two of the best college baseball teams in the country and they do not like one another. The No. 16 Red Raiders hosted the No. 2 Longhorns for Game 1 of a three-game series on Friday and it ended in fireworks.

After playing into the 10th inning, Texas Tech walked things off in an unusual way that will have you ready to run through a wall. It is an adrenaline rush.

With two outs in the home half of the first extra inning, the Red Raiders had a runner on both second and third. Texas pitcher Aaron Nixon worked an 0-2 count and it looked likely that he would get out of the inning unscathed.

But he forgot about the runners.

Texas Tech’s Kurt Wilson stared at the eyes of Nixon as the relief pitcher came to his set position on the mound. Wilson inched further and further down the third base line, and when Nixon looked down, Wilson took off.

There was not even going to be a throw.

Wilson fooled everybody, had the Longhorns beat, and walked things off for Texas Tech by diving head-first and stealing home.

As Wilson bolted down the line, his teammate Owen Washburn stood on second base and saw it happen. When he realized that Wilson was going to score, he threw his hands into the air, waited for him to touch the plate and then rushed toward home to join in on the dugout-clearing celebration.

It was quite the rush, take a look:

Texas Tech just stole home to walk-off Texas in the bottom of the 10th inning 🤯 pic.twitter.com/KniQTnChvY

Although the last walk-off steal of home on the collegiate level is unknown, it is incredibly rare. The last time that it happened on the MLB level was in 1982.

Watching Wilson take off from third base toward the plate is electric.

And the dugout view of Wilson’s heroics will make you want to jump the fence and join in on the celebration.

We’ll remember this one forever pic.twitter.com/4bdaDvUo42

Texas Tech will hope to follow-up its 10th-inning win with a series win or sweep on Saturday and Sunday. HORNS DOWN!