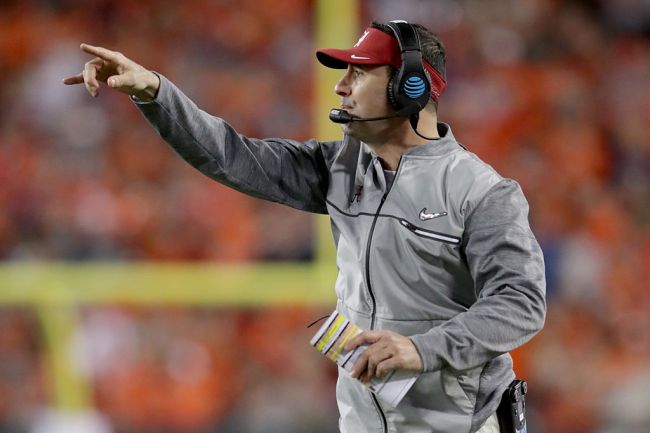 The University of Texas has hired Alabama offensive coordinator Steve Sarkisian as its next football head coach after informing Tom Herman that he will not continue in the role on Saturday morning.

Herman’s firing comes just four days after the Longhorns defeated the Colorado Buffaloes 55-23 in the Alamo Bowl to cap off a 7-3 season that began 1-2 in Big 12 Conference play. The slow start to 2020 put pressure on the administration to preemptively seek his replacement in lieu of a post-season change at the helm. In his four seasons in Austin, Herman led Texas to a 32-18 record and will be owed a $15 million buyout for the three remaining years on his contract. His staff will be paid a combined $9 million.

The university has decided to make a coaching change in football. See our statement here: https://t.co/d1fj5LpWAU

This decision comes after the school’s athletic director Chris Del Conte announced in December that Herman would remain UT’s head coach in 2021 after a failed pursuit of Urban Meyer. Texas and Meyer had been in talks throughout the season about returning to coaching, but Meyer ultimately turned down the chance to coach in Austin, citing health concerns (an arachnoid cyst on his brain lining forced his retirement from Ohio State) and stress induced by the transfer portal and the chaos that could ensue from a possible one-time transfer rule being enacted for next year. He has since been linked to NFL coaching jobs, because of the extended off-season and the lack of recruiting and transfer portal.

“There has been a lot of speculation about the future of our football coach,” Del Conte said in a statement on Dec. 12. “My policy is to wait until the end of the season before evaluating and commenting on our program and coaches. With the close of the regular season, I want to reiterate that Tom Herman is our coach.”

Saturday’s announcement comes with a clear change of heart amongst the Longhorn boosters and administration, and Sarkisian is set to take the keys to an offense that appears to be in good hands with redshirt sophomore quarterback Casey Thompson. Thompson took over for starting quarterback Sam Elingher in the Alamo Bowl after an injury and completed eight passes for 170 yards and four touchdowns.

Sarkisian, who has served as the offensive coordinator at Alabama over the last two seasons, led the nation’s third-ranked scoring offense in 2019 and the No. 1 total offense this fall. Prior to his time in Tuscaloosa, the 46-year-old was the offensive coordinator for the Atlanta Falcons in 2017 and 2018 after joining Nick Saban’s staff as an analyst in the fall of 2016. He is coaching career began in the hay day of Southern California’s dominance in the early-to-late 2000s as the quarterbacks coach and co-offensive coordinator alongside Lane Kiffin before he left for the head coaching job at Washington in 2009. In his five seasons with the Huskies, his teams went a combined 34-29. Sarkisian then returned to USC as the head coach in 2014, leading the Trojans to a 12-6 record in less than two seasons before being fired for disorderly conduct in 2015.

In 2020, under Sarkisian, Alabama is set to play Ohio State for the national championship on Jan. 11 and enters averaging 48.2 points per game. Quarterback Mac Jones and wide reciever DeVonta Smith are both Heisman Trophy finalists and running back Najee Harris has run for 1,387 yards and 24 touchdowns on 229 carries.