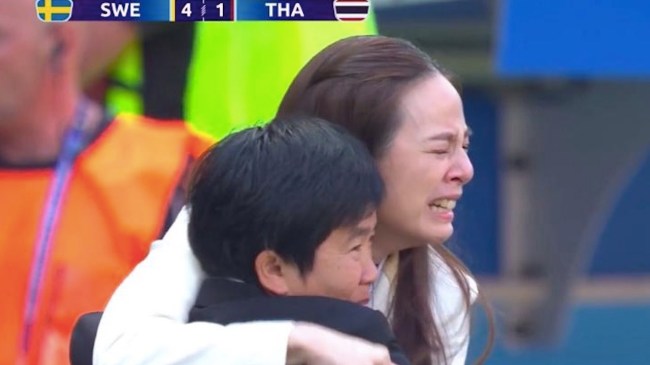 Despite how you may or may not feel about soccer, there’s simply no denying that the World Cup — whether it be the Men’s or the Women’s edition — is one of the grandest spectacles in the world of sports.

Whether it be players you’ve never heard delivering unforgettable moments or nations with the odds permanently stacked against them scraping their way into the limelight, the World Cup has a way of tugging on the heartstrings of sports fans unlike any other event.

This weekend at the Women’s World Cup in France, Thailand delivered one of those undeniably human moments that remind us why sports can be so powerful.

Thailand, who were on the wrong end of the USWNT’s now-infamous 13-0 opening match win, faced similar difficulties in their second match against Sweden, trailing 4-0 as the game came to a close.

However, with just 120 seconds remaining in extra time, Thailand’s captain Kanjana Sungngoen burst down the right side of the field, blasting a shot past the Swedish keeper to deliver Thailand’s first goal of the tournament.

And despite being down by three goals, both the Thai staff and their fans celebrated as if they had just won the game.

Most notable of the celebrations was that of Nualphan Lamsam, the 52-year-old general manager of the Thai Women’s National Team.

Lamsam is also one of the country’s leading businesswomen as she serves as chief executive of one of Thailand’s major insurance companies, according to Andrew Das of The New York Times.

Widely referred to as “Madam Pang”, Lamsam not only sponsors the Women’s National Team and the country’s women’s league, but she also employs the nation’s players during the offseason so they are able to have an income while continuing their training.

So, while Thailand’s second-ever Women’s World Cup appearance may only be for three games, they have already provided one of the everlasting images of the tournament and a moment that reminds us how much sports can truly mean.