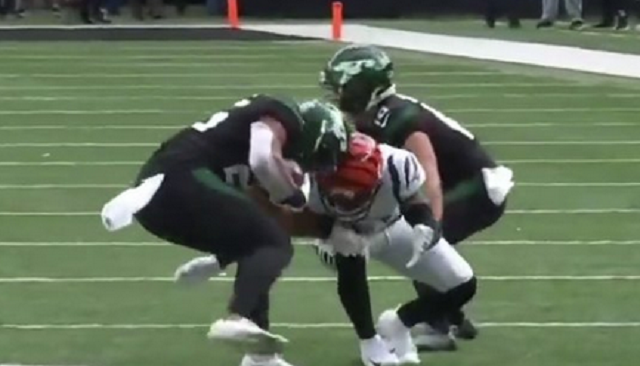 The Cincinnati Bengals got screwed by the refs at the end of their game against the NY Jets.

On third and long, Bengals’ Mike Hilton went low to tackle Jets’ Ty Johnson but Johnson lowered his helmet before getting hit. Hilton was called for a helmet-to-helmet penalty and the Jets were able to get the ball back to run out the clock.

Mike Hilton goes low to stop Ty Johnson on 3rd and long. Johnson ducks into the hit, draws the helmet-to-helmet contact, and the Jets get the first down on the ensuing penalty

— Christian D'Andrea probably does not own a brewery (@TrainIsland) October 31, 2021

The Jets went on to win the game by three points and NFL fans were absolutely furious with the call.

The referees called a helmet to helmet penalty on a defender attempting to make a low tackle in a key situation in the Bengals-Jets game. These rules drive me crazy because there is no common sense applied to them #NFL

This is the point of contact on the helmet to helmet. Hilton is at the WAIST of the ball carrier. pic.twitter.com/1FTBZEvp0A

That’s a really questionable call. There is NOTHING else the defender could do to avoid helmet to helmet other than simply NOT trying to make the tackle. He went as low and he could and the runner lowered his head into him.

Listen – the refs flagged the wrong guy for initiating the helmet to helmet but it’s not like it swung a billion money line parlays and eliminator pools. Gross.