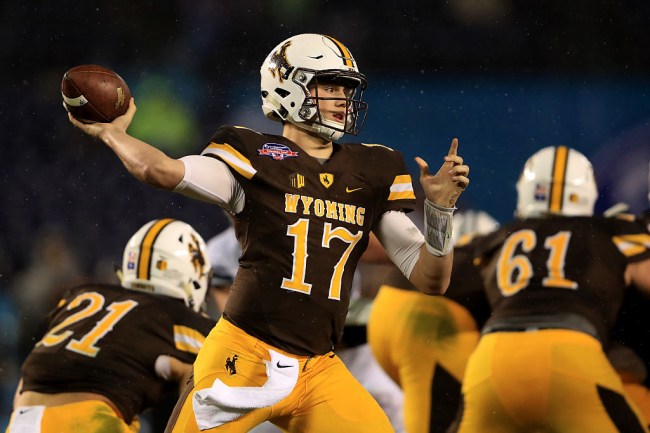 According to Albert Breer of the Sports Illustrated’s MMQB, the Cleveland Browns are going to take a quarterback with the No. 1 overall selection. As of now the Browns are split on taking either Wyoming quarterback Josh Allen or USC quarterback Sam Darnold. If the Browns end up passing on Allen the Buffalo Bills are very interested in moving up in the draft to pick him up.

If the Bills are going to make the jump all the way to No. 2, I think it’s going to take three first-rounders. The Giants would be taking themselves out of range for the blue-chip prospects, and it’s on Buffalo to make it worth their while. And you can see that type of deal appealing to the Bills, even at that high price; they land a top-two QB to build their franchise around and still have three more picks in the top 65 to put together an immediate playoff contender.

The Bills might even go as far as trading six picks for Allen.

Crazy tidbit on @sticktofootball this morning… Josh Allen could go no. 1, and if he doesn't, the Bills could be looking at packaging six (6!!!) picks to move up to no. 2 to grab Josh Allen.

The Bills are obviously in desperate need for a quarterback but six draft picks is a lot even for a stud like Allen. We’ll have to wait and see how things work out on draft night this year.