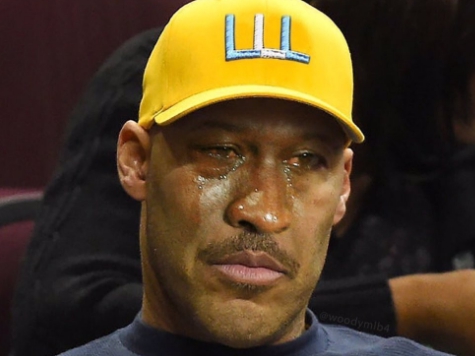 Father of UCLA superstar Lonzo Ball, LaVar, spent most of the college basketball season annoying everyone in the basketball universe with his immense shit talking.

Of course everyone on the Twitter was ready to let LaVar Ball have it after UCLA lost to Kentucky in the sweet 16.

"If I was coaching we would have beat Kentucky." – LaVar Ball pic.twitter.com/sUhOl6oPdI

The irony that LaVar Ball is about to be photoshopped onto crying Jordan @DrewFranklinKSR @KySportsRadio pic.twitter.com/F2SzS3xqiC

Um, Mr. Lavar Bell..i DID try and tell ya. I most certainly did. You cut checks your son couldn't cash. I did warn you sir. I really did.

BREAKING: LaVar Ball checks in with 3 minutes left and scores 125 points leading UCLA to a 200-86 victory over Kentucky (via LaVar Ball)

Remember when LaVar Ball said "If Steph Curry was on UCLA he'd shoot them OUT of the game"…. pic.twitter.com/hSBDvOyV7m