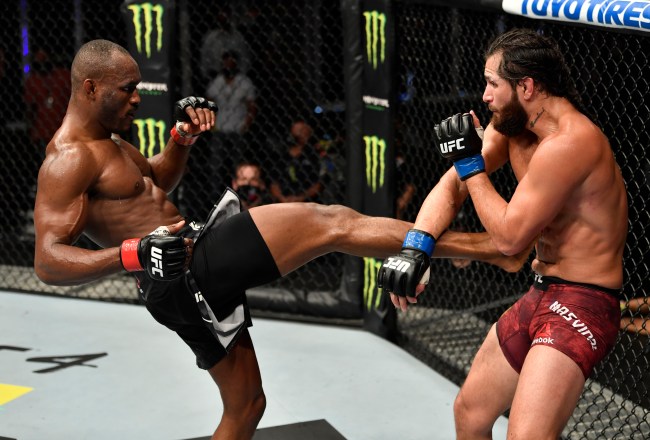 UFC 251’s much-hyped Fight Island main event between Kamaru Usman and Jorge Masvidal has come and gone and it was pretty much a snooze fest.

Usman dominated most of the fight by clinching and repeatedly stomping on Masvidal’s toes for five rounds for an easy decision win.

While Usman’s fighting style is effective many fans were left dissatisfied with the fight.

I agree that he deserves the BMF belt. Just not the same one as Masvidal. It’s the Boring Motherfucker Belt. #UFC251 pic.twitter.com/WEVUS3Exp0

Me whenever Usman next headlines a card #UFC251 pic.twitter.com/TjUkg0JDJI

Incase you missed the #UFC251 main event, here is the full recap….. pic.twitter.com/MmqWpdZCd3

All the people who paid $65 to watch usman give out hugs and toe stomps 🤡 #UFC251 pic.twitter.com/yAJIl0SnRi

That was the main event #UFC251 pic.twitter.com/atbEscOB69

Masvidal being carried out the arena after 234 foot stomps from Usman: pic.twitter.com/y6JO1sZAne

I agree!! also in the new UFC game while playing as USMAN, if you press up up up and half circle while clenching your opponent against the cage, you’ll do his signature double foot stomp shoulder strike combo. https://t.co/EBN0DwdrGf

Usman’s coach preparing him for the fight #UFC251 #UFC pic.twitter.com/0ZvXof8PwW