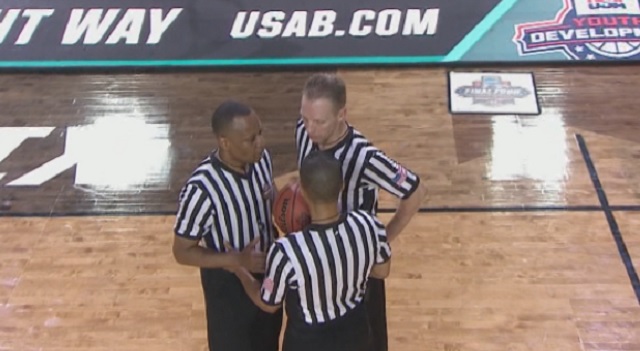 The second half of tonight’s NCAA championship game has been absolute dumpster fire thanks to the refs calling almost every ticky tack foul.

The game was so bad that people took to social media to complain about the reffing.

this game is fast…except it's going slow cuz it's so awful. it's ugly on the inside.

Kind of scary that the only people on the floor getting paid are the refs.

HOW ARE YOU GOING TO CALL A Flagrant 1 on the player who the refs initially said GOT FOULED. pic.twitter.com/u01uCDgA1a

Refs getting some face time at the #NationalChampionship pic.twitter.com/54z8qmNJ4g

You have got to be kidding me. These refs again are destroying everything good about #nationalchampionship. That is disgusting!

The NCAA managed to bring targeting into basketball. Congrats on ruining multiple sports.

Let these kids play. Put the whistles away.

#nationalchampionship refs: You can't miss a foul if you call everything pic.twitter.com/4ir4AG2iEf

Man I can't watch this anymore man! I would like to see the kids decide who wins the game! I mean Bruh!! Smh