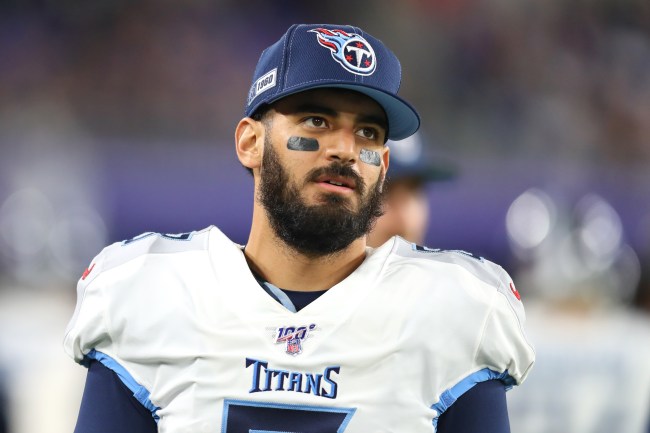 It seems like the Las Vegas Raiders are close to signing a new QB this offseason.

According to various reports the Raiders are closing in a deal with former Titans QB Marcus Mariota.

The #Raiders are pushing to close out a deal with QB Marcus Mariota, sources tell me and @RapSheet. Mike Mayock's No. 1-ranked QB in his @nflnetwork coverage leading up to the 2015 Draft could soon be on his roster.

The #Raiders have had eyes on Marcus Mariota, the former #Titans first-round pick, for some time. Sounds like he has a landing spot. https://t.co/jgkwCHYddm

Raiders’ GM Mike Mayock, who was a draft analyst at the NFL network, was a big fan of Mariota during the 2015 draft.

Mayock on Marcus Mariota prior to the 2015 draft:

“The more tape I watched, the more I appreciated what he was asked to do in the Oregon version of the spread offense. He reads combination routes, he takes tremendous care of the football, and he wins games.” https://t.co/Z5sIocVwWS

It’s interesting since the Raiders are interested in bringing Mariota to Las Vegas to be a backup QB.
pic.twitter.com/5UMXba2Mqb

It’ll be interesting to see if Mariota is going to come in and back up for Derek Carr or if he’s going to compete for the starting job right away.