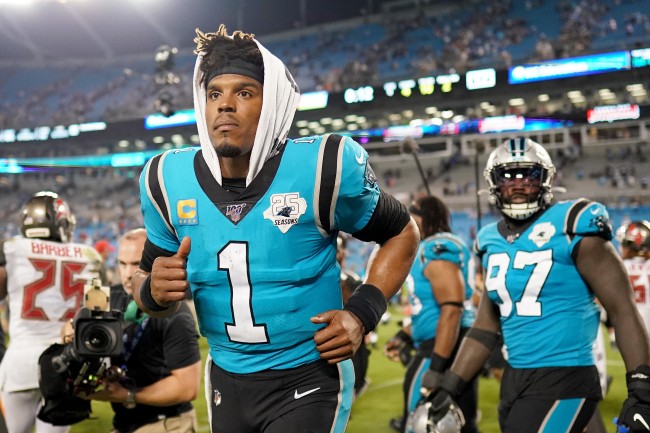 The New England Patriots have found their replacement for Tom Brady.

On Sunday night, ESPN’s Adam Schefter is reporting that the team has signed former NFL MVP Cam Newton to their roster.

New Patriots’ QB Cam Newton turned 31 years old last month, what for what many quarterbacks is the prime of their career.

Source: The #Patriots are signing Cam Newton to a 1-year deal. A chance to compete. This has been in the works. A bare minimum deal.

For the #Patriots and Cam Newton, who have quietly worked on this recently, it’s a 1-year deal worth up to $7.5M, source said. https://t.co/YSHLAcRupb

Early thoughts on Cam Newton to Patriots: His willingness to accept a modest 1-year deal creates low-risk, high-reward situation for team to pounce on. Not necessarily a reflection of how team views Jarrett Stidham, in my view, but a chance to bolster the depth chart.

The Internet was pretty hyped about the signing.

And there it is. Damn. Very legit chance Cam is once again a top 10 fantasy QB this year. https://t.co/8kQierSCKK

A look at how Cam will look with his new team….

Gonna be hilarious when a disheveled Bill Belichick exits his press conference every week in his cutoff sweatshirt and them Cam walks in to take the podium dressed like this. pic.twitter.com/Jh5f4KHEJE

The Bills, Jets and Dolphins after the Patriots signed Cam Newton pic.twitter.com/Wtn3Wp13SK

Jarrett Stidham: I cant wait to be the starting quarterback for the New England #Patriots