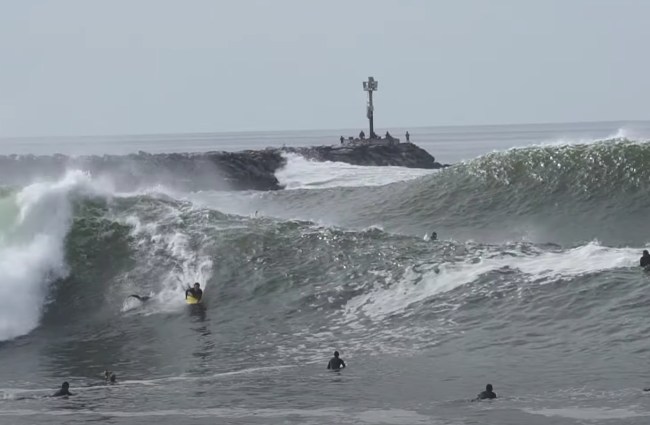 The Wedge is one of the most peculiar waves in America. It’s located in Newport Beach, California at the end of the Balboa Peninsula and when conditions are right it can produce waves reaching up to 30-feet. But they don’t always break predictably, and they’ll sometimes launch a surfer high into the sky almost like the ‘double up’ that you see in wakeboarding.

The surfers were out in numbers at The Wedge this week. It’s probably some combination of many people still unable to go to work and the conditions being perfect but the water looked packed compared to what’s been seen in SoCal lately.

Thre are two clips here actually. The first clip from the JacuzziSurfer YouTube channel shows a solid ten-plus minutes of surfers and bodyboarders dropping into The Wedge with some paddlers getting wrecked along the way. The other clip, the second one, is actually my favorite and it’s from a month ago. It shows all the best wipeouts from The Wedge this Spring.

Now for the wipeout compilation that you all deserve. These are the most brutal moments caught on camera this Spring.

The waves at The Wedge are caused by the rock jetty on the western side of Newport Harbor after construction was done in the 1930s. This wave typically goes off in the Summer and Fall so things are just getting started.