This Week in Combat: Bellator 238 and UFC Raleigh Go Head to Head 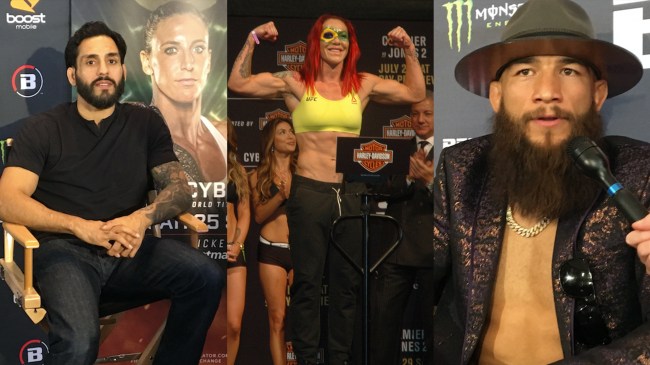 It’s a rather action packed weekend in combat sports.

There are no less than 20 MMA events scattered around the world, along with the Danny Garcia vs. Ivan Redkach fight (hey, it’s for an interim title), but the main focus centers on the UFC and Bellator, rival MMA promotions, going head to head on Saturday, January 25.

Both events have some compelling fights on them, so in the end, it really depends on who you want to see, and probably which streaming service you have. Those are key factors when deciding which event to watch, but make no mistake, both Bellator and the UFC have some great fights hitting the streaming platforms this Saturday.

For more on both fight cards, take a look below.

Over on our end, we’ll be devoting most of our attention to Bellator 238: Budd vs. Cyborg. Last week was all about UFC 246, so it’s good to see Bellator booking one of their biggest names for this event, you know, while MMA remains somewhere in the public consciousness. Besides, Bellator 238 takes place at the LA Forum, so we can’t help it if we’re picking the local fight. At least we’ll be bringing you some live coverage on Saturday.

Anyway, back to the fights …

Cris Cyborg is a rather big name in mixed martial arts. She’s one of the greatest female fighters of all time, once going undefeated for 13 years before suffering a loss in 2018, and on Saturday, Cyborg finally makes her Bellator debut, taking on champion Julia Budd for the featherweight title.

Cyborg has already won championship belts in the UFC, Strikeforce, and Invicta, so a big storyline centers on her quest to become the first MMA fighter to hold belts in four major promotions. It’s a distinction that basically no one will ever be able to attain ever again because of how the fight game works, and it’s an interesting twist on a fight between an MMA legend and a very game opponent. On her end, Budd is undefeated over the last nine years and much more game than the +355 the oddsmakers are giving her at the sportsbook.

Watch until the end to see @HenryCorrales86's unique pre-fight ritual. It's a doozy … might even freak you out a bit.
Corrales fights Juan Archuleta this Saturday at #Bellator238. pic.twitter.com/6KY7ydChz1

Aside from the Budd vs. Cyborg main event, Bellator 238 has several more intriguing fights, beginning with the co-main event between Hungary’s Adam Borics and former bantamweight champion Darrion Caldwell. The two will face off in the quarterfinals of the single-elimination Bellator featherweight Grand Prix, a winner-take-all tournament for the title and $1-million.

There’s also the promotional debut of former UFC standout Sergio Pettis, who is expected to make an instant impact on a somewhat thin Bellator bantamweight division, and, of course a featherweight bout between Bellator stalwarts Juan Archuleta and Henry Corrales.

The Archuleta vs. Corrales fight is of particular interest because both fighters are coming off losses and known to deliver exciting, action-packed performances.

Hear @jarchmma talk about his #Bellator238 opponent, Henry Corrales, and why he's an MMA unicorn … pic.twitter.com/5xenH9D0K6

For dos Santos and Blaydes, a win is essential if they’re to stay near the top of the pack at heavyweight, however, they’re both at very different places in their careers, despite similar rankings.

Blaydes, ranked third, is essentially two wins away from a title shot, although you never really know what will happen in the UFC at this point. But, he enters UFC Raleigh on the heels of back-to-back wins, so a definitive victory, and stoppage, over a former champion like dos Santos could be a major boost to his resume.

Dos Santos, ranked fourth, is essentially a heavyweight gatekeeper at this point, but still a very live threat, especially given he has the striking advantage.

The remainder of the card has a few highlights, in particular the dos Anjos vs. Chiesa fight, along with a strawweight bout against Angela Hill and Hannah Cifers. There’s also English prospect Arnold Allen, who fights on the prelims.