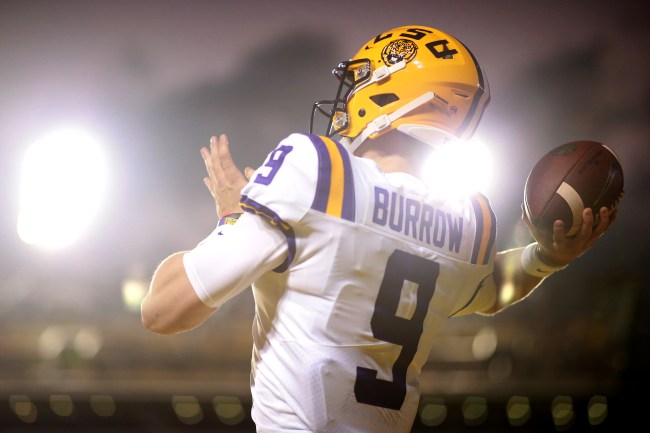 The LSU Tigers capped off an undefeated 2019 season after dismantling the Clemson Tigers 42-25 in the College Football Playoffs National Championship. You know the story by now. LSU demolished the Georgia Bulldogs 37-10 in the SEC Championship Game, LSU tore apart Oklahoma 63-28 in the first game of the College Football Playoffs, and quarterback Joe Burrow won the Heisman Trophy and was later drafted #1 overall by the Cincinnati Bengals.

It was a dream special season for Coach O and the Tigers who started 2019 ranked #6 in the preseason AP Poll. They were even projected to finish 2nd in their own division behind Alabama. But they dismantled every team they faced and this week they’ve unveiled their three Championship rings.

Each ring has its own flair and unique historical elements throughout. The SEC Championship ring is adorned in yellow gold and 16 purple stones to signify LSU’s 16 SEC Championships throughout the years. The scores of all their 2019 SEC conference wins are printed on the inside of the ring. Each side of the ring has a phrase that’s central to the team, ‘Geaux Tigers’ on one side and the team’s catchphrase ‘One Team. One Heartbeat.’ on the other.

The Championship ring provided by the CFP has a gold logo similar to the CFP rings of previous years. It was set to be silver but LSU proposed the idea of putting the purple stones in there, the first time a team had asked for customization, and CFP was all for it.

LSUsports.net explains the LSU National Championship Ring better than I ever would. This is the flagship ring. The best by far. Here’s their description:

The crown jewel of the group is the LSU-issued national championship ring. An unprecedented season deserves an unprecedented ring, and that’s exactly what the Tigers designed. Stringfellow was around for both the 2003 and 2007 design processes, which were modeled after the New England Patriots title-winning tokens. “The rings we ended up with this time look like no ring that’s ever been done,” he says. “The national championship ring is the first time they’ve done a ring that shaLSUpe and size in their history.”

The top of the ring is stunning, featuring white-gold LSU stones on top of a yellow-gold rendering of the national championship trophy. Combined with the purple stones behind the trophy, it showcases all three official school colors: purple, gold, and white, a very intentional design element. “They’re our school colors,” Bourgeois says, “so let’s make it fit.”

Four stones for the four national championship programs in modern history line the edges of the top. The ring is modern in design but inspired by LSU’s tradition, drawing on design elements from not just 2003 and 2007, but also 1958. “There are other people who have walked this road before you,” Ponamsky says, “and you want to make sure that you show some deferential kind of respect to them.” (via)

Additionally, one side of this ring features a rendering of LSU’s Tiger Stadium. This is a nod to all of the LSU teams of the past which helped the 2019 team reach their level of success. It’s a symbol of all the support that led to the undefeated season.

You can read up more on these rings over on LSUsports.net where they have a complete rundown on every feature of these three championship rings.