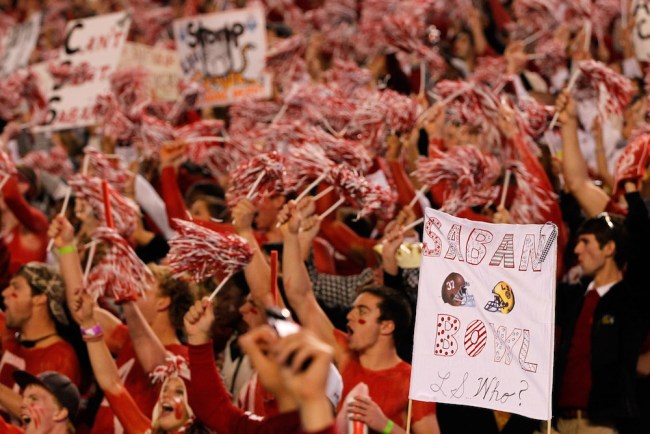 The night before a major sporting event, I like to get tipsy, but not drunk. You gotta be able to wake up and tailgate, after all.

But on the night before my fraternity brothers and I were going to sneak into the Game of the Century — No. 1 LSU at No. 2 Alabama in Tuscaloosa on November 5, 2011— we were nervous. So we got hammered.

At one bar, my bros’ fake IDs worked. Mine said I was Trevor Pryce— a former Broncos defensive end and the first name that came to mind when I bought it— and listed an address in Calgary, Alberta. It was currently in an evidence room in the police station in Columbia, Missouri.

A few months earlier, the cops had stormed into a bar I was at. The officer’s statement, which I obtained in court, reads:

“We entered the establishment and Officer Clements located two subjects that appeared to be underage. Officer Clements made contact with one subject, and the other subject, later identified as Trevor Kraus, began to briskly walk. I advised Kraus to stop but he continued through the crowd.

I should mention this is pretty much the same way I’ve snuck into more than 30 major sporting events— including The Masters, World Series, and Super Bowl— throughout my career, which I wrote about in my book Ticketless.

“I recontacted Kraus on the dance floor area of the business and observed him with a Bud Light beer bottle in his hand. I asked Kraus why he continued to walk away from me after I had told him to stop and he advised because he was 19 years old. Kraus was escorted out of the business.”

Without my fake ID at the bar in Tuscaloosa, I went around to the side of the patio, which was guarded by a short white picket fence. I stepped over it, but my foot landed on a stack of cardboard boxes. I lost my balance and fell into a table, scattering condiments all over the floor.

Two bouncers grabbed me and took me outside the front entrance. One of the bouncers said to the other, “Hold onto him until the Big Bad Wolf gets here.”

I did not want to find out who the Big Bad Wolf was. As soon as the bouncer’s grip on my shoulder loosened, I took off running into the crowded street and got away.

I’d previously hidden in a garbage bin to get into an NCAA Tournament game and sprinted past an usher at a Mizzou-Nebraska football game the previous year so most of my fraternity brothers at the University of Missouri knew I was … different.

When they heard about my Wimbledon sneak and my three spin-moves (the term I used for running into stadiums without a ticket) during the 2011 World Series, they must’ve considered me nuts. However, a few of them wanted a piece of the action.

On November 4, 2011, six of us had stuffed into a 1986 Station Wagon (it had three rows of seating and was awesome). We rumbled 600 miles from Columbia to Tuscaloosa. LSU was traveling there as well and we knew the atmosphere would be as rowdy as it gets in college football.

“Here’s what we’re looking for,” I told the guys during the drive. “A nice, wide space to slip past the ticket taker. No security presence behind them. Plenty of room to run. And ideally, a staircase or ramp to the top of the stadium.”

We brought old Mizzou tickets to hand to the people at the gate as decoys. “It’s simple, really. Hand them your ticket, and while they’re looking down, just go. Sprint forward then weave among fans in the concourse. Take off your jacket and have your red ’Bama shirt underneath. Use the adrenaline and your instincts to your advantage.”

One member of our crew was worried about his “future” or some such nonsense and bought a ticket before we left. The other five of us hadn’t given the slightest thought to our futures — and didn’t want to.

Two hours before kickoff, we swapped our fratty tailgate attire for spin-move gear: hats, jackets, red undershirts, and running shoes. We paced the exterior of Bryant-Denny Stadium as I explained the plan.

“Alright, I like the setup at these three. I’ll take Gate 37. Al, you’re on 38. Drew, you’ve got 39,” I said. “Jim, Ben — you remember that entrance on the other side, with the stairs behind the ticket takers? I think that’s your best bet.”

Before we split, we agreed to meet in Section GG at kickoff. I was clear: If someone got caught, we would deal with it after the game. But I couldn’t help thinking my friends’ spin-moves were on me. What if they tripped on their way in and were hauled to jail? 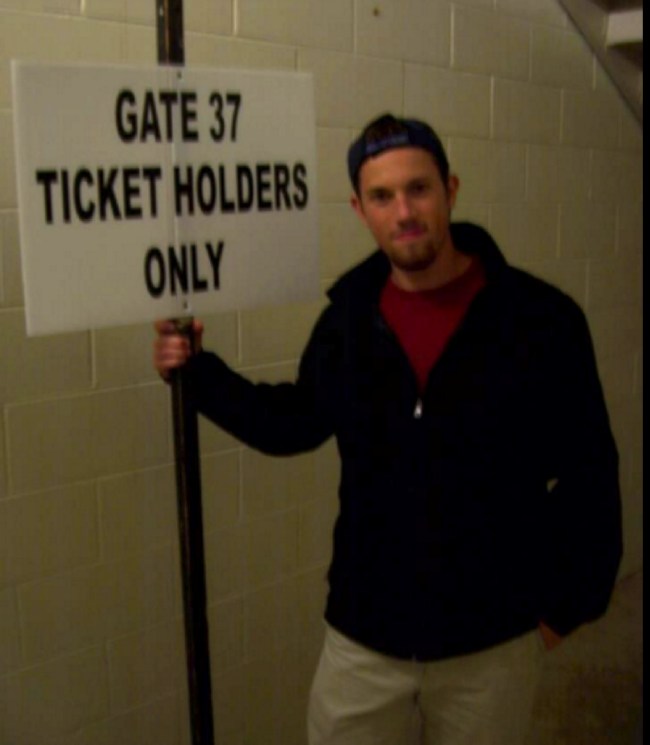 I had never watched someone else spin and seeing a friend pull it off— observing the ticket takers’ confusion and watching them contemplate chasing before giving up— would be one of the coolest moments of my life.

But my line moved quickest, so I became the leadoff hitter. My ticket taker stood two steps in front of a 10-foot-wide opening that led into the stadium. There were no turnstiles.

I walked toward her, and when she reached for my ticket, I sprinted past. I spotted a ramp to the right and kept running until I reached the top. I looked behind me as I changed clothes. Security had no chance. I walked to the nearest concession stand with long strides and heavy breaths. I bought a bag of peanuts, then headed to Section GG.

A few minutes passed and I began to eat my peanuts. I struggled to crack the shells as my hands were trembling with adrenaline and fear for my friends. All I could think about were untied shoelaces and handcuffs. I tried to focus on the simple routine:  crack the shell, pop the peanuts in my mouth, toss the shell on the ground. Repeat.

I had almost finished the bag when I saw Al’s goofy grin appear from around a corner. I skipped over to him, cackling like a hyena, and hugged him.

He exhaled. “I was so nervous, man. But I kept thinking about how much it would suck to be the one guy who didn’t make it. Otherwise, I don’t know if I could’ve done it.”

“They saw you go and they all kinda stood up straighter, so I got out of line and took another lap. Halfway around, I saw a ticket taker who was chatting away with someone and she was standing way in front of the gate. So I came in from the side, sort of speed-walking, got past her, and took off.”

We felt taps on our shoulders. It was Drew, who recapped his adventure.

“I get to the ticket taker and look her up and down. Forty years old, far from a track star. She reaches out for my ticket and I stick my right hand into my pocket and put one finger up with my left hand and I say, ‘One second here, sorry.’ So I’m reaching in my pocket and I feel nothing but my balls and think, ‘Jesus, these suckers have shriveled.’ But then I remember what Trevor said; how he knows he’s gonna get in because he needs to get in.”

I smiled wide like a proud papa who had taught his children to play catch.

“I shifted my weight, spun all the way around, and my momentum carried me into the concourse. Then, I don’t know. I saw a ramp to the right and ran straight to it. Easier than I thought.”

We were still missing two spinners, and kickoff was 20 minutes away. The peanuts were gone when Ben came sauntering up a ramp.

“We were at that gate you found. It was ideal: wide, with a staircase directly behind those ladies taking tickets. We were planning to go at the same time, but I was so jacked up, I jumped offsides, ya know?”

“You mean you went before Jim was ready?”

“Yeah, I walked up and handed my Mizzou ticket to the one on the right and I went. But she reached out as I was going past her and grabbed my jacket sleeve. I thought about what you said, how once you go, you’re committed, so don’t stop. I did sort of a swim move.” He replicated a swimmer’s stroke with his right arm.

“Nah, I kept telling myself: ‘Whatever you do, don’t look back.’”

We hoped every face that rounded the corner would be Jim’s. We were all walking back and forth, arms crossed, looking to the sky until we saw his chubby cheeks smiling at us as he emerged from a bathroom.

We burst into laughter and high-fived and hugged, each of us hugging each of the other four. “What happened to you?” Ben asked.

“Once they saw you get past, they knew we were together and closed the gap and put their hands up to stop me. So I backed out of the ticket line. I went and sat on a bench on the other side of the stadium, just to think. The next thing I knew, I’d been there for half an hour. And I know Trev said that once a game starts, the concourses are empty ’cuz all the fans are in their seats.”

“I went to the closest ticket line. I got to the front, handed off my dummy ticket, and ran. All I heard was someone behind me go, ‘That guy’s fuckin’ awesome.’”

We skipped into Section GG like we were drunk, because we were — on life, on adrenaline, on friendship. It was just before kickoff, with the five of us in a standing-room-only area as “Sweet Home Alabama” blared on the speakers with the whole crowd waiting for its moment.

“Roll, Tide, Roll!” boomed the crowd, with three punctuating pompom waves. It was all in perfect harmony, 100,000 people on the same wavelength of anticipation, nervousness, and passion.

This video, which my friend took, doesn’t do it justice but I assure you it was absurdly loud.

“Trev, we’re not in Missouri anymore,” Drew said. “Thank you for this.”

Five spin-moves. The Game of the Century.

We rooted for ’Bama because they were the home team but we didn’t care who won. We won. We got to experience that moment.

The ESPN recap of the game included this paragraph:

“A crowd of 101,821 squeezed into Bryant-Denny Stadium. Tens of thousands more converged on Tuscaloosa without tickets, content to just tailgate, soak up the atmosphere and watch the game on televisions set up outside the stadium.”

Let the record show: The true attendance that day was at least 101,826.

Trevor Kraus is the author of Ticketless and a sports fan, writer, and wannabe NHL goaltender from St. Louis.