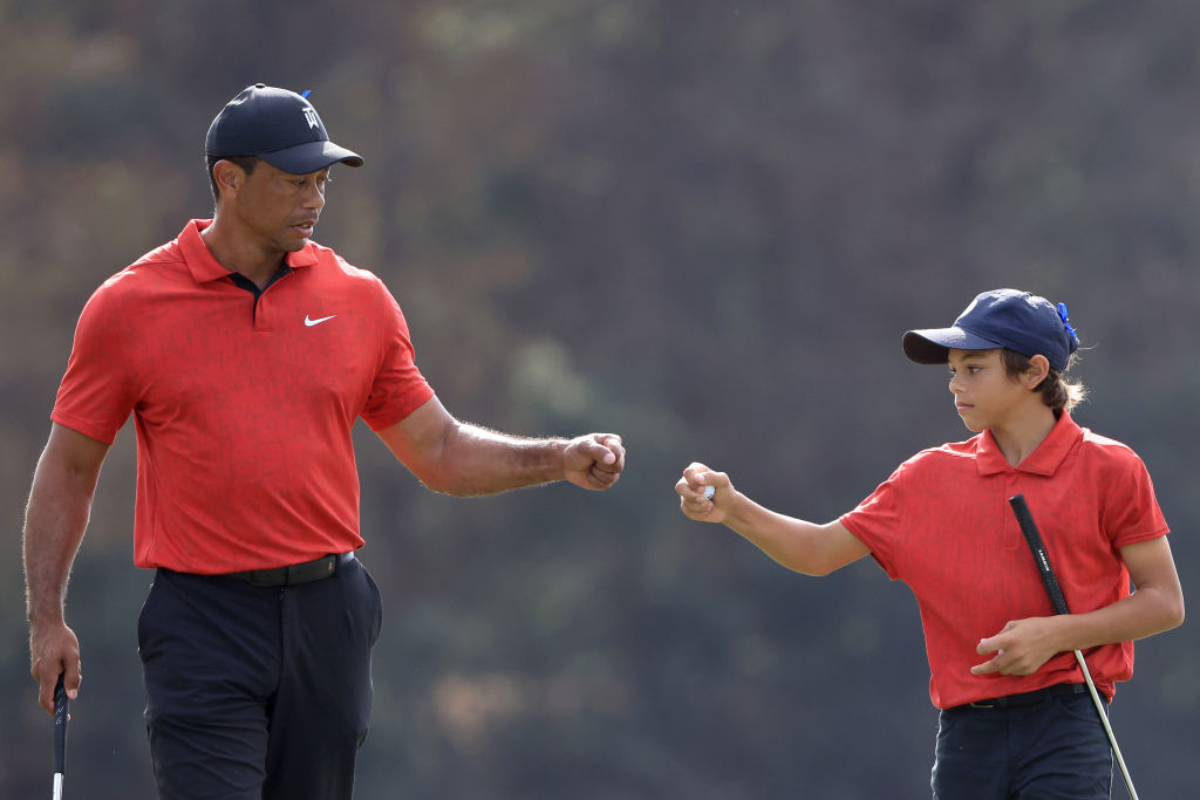 Few professional athletes of the modern era have lived under the microscope like Tiger Woods. The only real comparable figures are Michael Jordan, LeBron James, and Serena Williams who have all had every stage of their lives exhaustively cataloged. Tiger’s son Charlie Woods could very well be the next generation of athletes to live through that.

Tiger Woods’ late father, Earl Woods, was a Lieutenant Colonel with the U.S. Army’s Special Forces and served two tours in Vietnam. He famously raised Tiger in a way that made him unflappable to distraction.

Training Tiger to block out all distractions and have laser focus isn’t the only thing that led to Tiger becoming the most dominant golfer in history but it certainly contributed. Now, Tiger is passing that training along to his son Charlie Woods and he’s doing it ‘non-stop’.

Tiger discussed passing along the mind games training to Charlie Woods this week at the Hero World Challenge in The Bahamas. He said:

Tiger shared this while speaking with Paul Azinger, former FSU golfer and 1993 PGA Champion. Woods went on to say:

“Zing (Azinger) can attest to this, he played in an era where certain players, and we’re not going to mention anybody by name, but certain players would do certain things with clubs and shoes and timing and trying to get in your head, the early walk. That was still prevalent when I came out here, and a lot of these guys don’t know about any of that stuff, but people did it.”

While I wish Tiger would name names on who used to do that, it’s kind of more fun to imagine who the elder golfers were employing those distraction tactics.

As for Charlie Woods’ golf future, it is incredibly bright. Charlie Woods has already shot a 68 in a tournament that his dad was caddying for him. Look at that swing:

Yesterday, Charlie Woods shot a career-low round of 68. pic.twitter.com/miaZ447trf

Charlie Woods’ swing as a 13 year old is beyond pure… very Rory-esque through the ball, and an even more Rory-esque finish pic.twitter.com/N0QMg3pKsh

Charlie Woods is also known to employ some mind games of his own. Here he left a note in a bunker for Justin Thomas back in 2020 to get in his head;

Of course, should Charlie Woods decide that golf isn’t for him one day then I’m sure Tiger will support him in that decision. But for now, it appears as if Charlie loves the game and is following in his father’s footsteps.