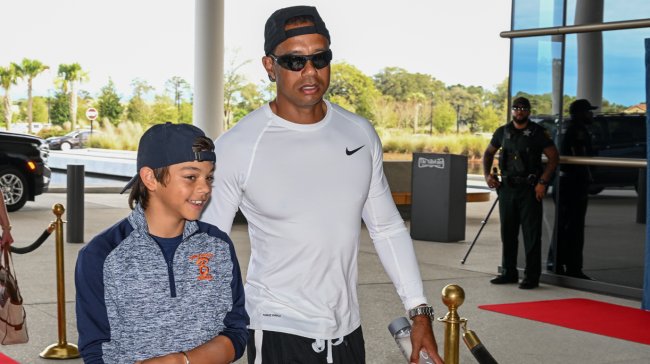 Many golf fans have wondered for years what the PGA Tour will look like once Tiger Woods hangs up his spikes for good.

On more than one occasion over the years it appeared that golf was going to be without its biggest draw, but Tiger kept coming back.

Now 46 years-old, the days of seeing Tiger Woods being competitive in PGA Tour events are officially running out, if not already gone.

After numerous golf-related injuries, a couple of worldwide scandals, and a devastating car crash, age is finally catching up to the legend.

Thankfully, it doesn’t appear that Tiger Woods will be fading into the background of golf anytime soon though.

Not only is he officially a billionaire thanks to golf, he’s one other really good reason for not disappearing: his son, Charlie.

He acts just like his famous dad (even the famous fist pump), and if this past weekend is any indication, he might be winning PGA Tour events of his own someday.

While many of the best golfers in the world were busy plying their trade at the Presidents Cup, Tiger and Charlie Woods were at a 36 hole qualifier for the Notah Begay III Junior Golf National Championship at Mission Inn Resort in Howey-in-the-Hills, Florida.

After shooting a first-round 80 with his dad on the bag, Charlie came back on day two to card a career-low 4-under 68.

He would finish tied for fourth in the Boys 12-13 division for the tournament.

this kids got a shot to be the next Tiger or something https://t.co/ejlaF4qvbG

After the successful tournament, Charlie Woods gave his first interview of note

In it, perhaps not surprisingly, Charlie Woods gave his dad some of the credit for that career-low score after a bit of a rough first day.

During his career-low round, Charlie caught the lip of the cup on the par 5 14th hole and it almost went in for an albatross – something his dad said he has only done twice in his life.

“When I hit it I knew it was good,” said Charlie, sounding an awful lot like Tiger. “When it started trickling down I thought it was going to be close, but not that close.”

As for having such a knowledgeable person like his dad as his caddie for the weekend, Charlie said, ““That was awesome. I couldn’t have done it without him. Like some shots, I would have been so off. But he steered me in the right course.”

Golf fans, as one might expect, absolutely loved his interview and the fact that Charlie seems happy and finding success on the golf course.

I noticed the voice, too. It sounds like he’s having fun and enjoying the experience. Good for him!

“When Charlie goes to college he will sign the biggest NIL deal in the history of NIL deals,” another fan observed.

The one thing, other than the fact that he sounds like his dad, is how big Charlie’s hands are.

I noticed. Lol..😃He’s gonna be a big boy. God Bless him and Tiger🙏🏽

Kids hands are huge!! It’s like when you see a puppy and they’re cute now, but you know they’re gonna be monster later on.

Fingers crossed he makes to the Tour some day.