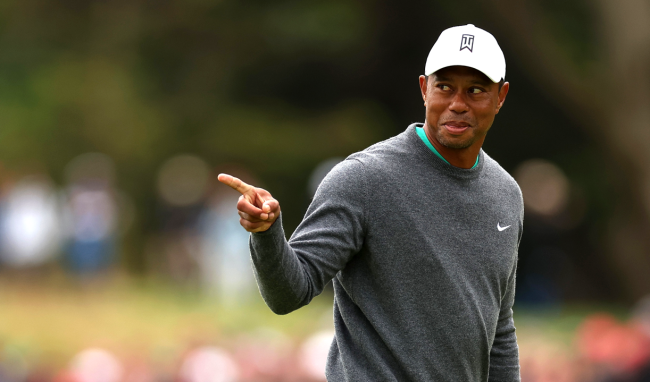 Newly minted billionaire Tiger Woods has appeared to have had a very good time playing in the JP McManus Pro-Am over in Limerick, Ireland this week.

Despite shooting a five-over 77 in the opening round and finishing tied for 39th, Woods joked mid-round on Monday, “The team’s doing great. Just don’t look at our scorecard. But we’re having fun.”

That much was certainly apparent on Tuesday when the 15-time major winner asked the gallery which club he should use on the tee at Adare Manor, a 7-iron or 8-iron.

When the crowd overwhelmingly told him to use the 8-iron, Tiger handed back the 7-iron and said, “8-iron it is.”

As he approached the tee for a couple of practice swings, Tiger asked the fans, “Do I need to draw it or cut it?” before making a joke about “a lot of beers” that made the crowd laugh.

Tiger asking the crowd which club he should hit 👏👏👏pic.twitter.com/QZkQhuzwzC

Fans, of course, loved it.

At another point during the tournament, Woods and former world number one Jon Rahm were caught on camera talking about their golf swings.

“Do you still, on your Trackman stuff, do you still hit up on the face?” Woods asks.

“If you think about it, when you turn your chest it’s going to go up,” Rahm continued. “So, when I’m swinging my best, I’m somewhere between one-and-a-half and three, and the ones I try to hit high I’m at four.”

Not sure exactly what they were talking about, but it sure would be nice to see more of this type of thing in the coverage of other golf tournaments.

Psssst. This is the content most viewers want to have an option to see and hear. More hot mics. More casual convo between caddies and players. More thought process. I don’t need hours of talking head stories and anecdotes.

This is better than watching them play golf. Can we get players to talk more and play less??