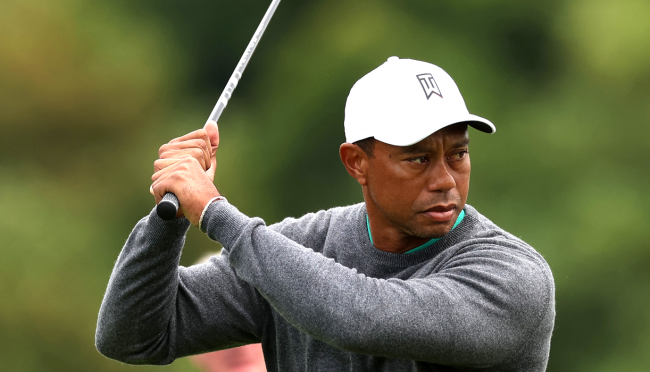 The return of Tiger Woods from a near career-ending leg injury has been one of the biggest stories in golf this year.

While he wasn’t tremendously competitive at either the Masters or the PGA Championship – he finished 13 over par in 47th in the first event and withdrawing after shooting a 79 in the third round at the latter – fans were still thrilled to see him play.

Fans were then equally disappointed when Woods announced he would not be playing in the US Open in June.

I previously informed the USGA that I will not be competing in the @usopengolf as my body needs more time to get stronger for major championship golf. I do hope and plan to be ready to play in Ireland at @JPProAm and at @TheOpen next month. I’m excited to get back out there soon!

Now, with the 150th Open Championship at St. Andrews just a little over a week away – it begins on July 14 – Tiger says he is back once again and explained why he chose to skip the US Open in favor of the British Open.

“The plan was to play the U.S. Open, but physically I was not able to do that,” Woods told reporters Tuesday, reported ESPN, at the JP McManus Pro-Am at Adare Manor Golf Club in Ireland. “There’s no way physically I could have done that. I had some issues with my leg and it would have put this tournament in jeopardy, and so there’s no reason to do that.”

Woods continued, “This is a pretty historic Open that we are going to be playing. I’m lucky enough to be part of the past champions that have won there, and want to play there again, and I don’t know when they are ever going to go back while I’m still able to play at a high level. I want to be able to give it at least one more run at a high level.”

Tiger and his team shot a five-over 77 in the opening round of the JP McManus Pro-Am, but he was still enjoying himself.

As for how long he expects to continue to play at the highest level of golf, Woods was unsure.

“I don’t know. I really don’t,” Tiger said. “If you asked me last year whether I would play golf again, all of my surgeons would have said no. But here I am playing two major championships this year. I will always be able to play golf, whether it’s this leg or someone else’s leg or false leg or different body pieces that have been placed or fused. I’ll always be able to play. Now if you say play at a championship level, well, that window is definitely not as long as I would like it to be.”