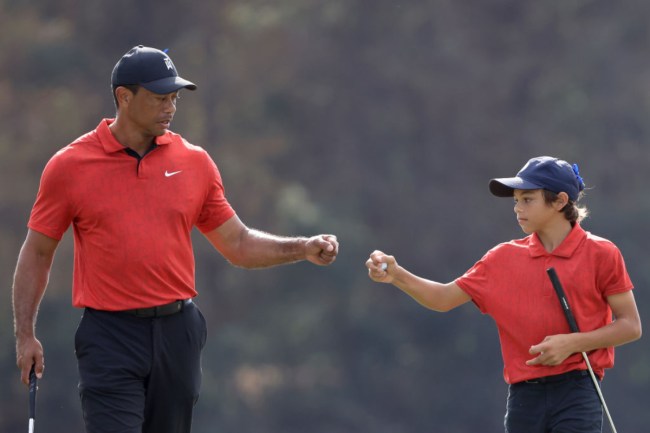 Tiger Woods and his 12-year-old son Charlie Woods stole the show yet again at the 2021 PNC Championship just as they did in 2020. This year’s go-around was a bit more special, of course, given that this was the first time the elder Woods had teed it up in public following his February car crash.

In the weeks leading up to the event, Tiger explained that he was lucky to be alive and even more lucky to still have his right leg. For Tiger to make his return with his son beside him made for an emotional weekend that the two will surely never forget.

The public won’t be forgetting what they witnessed anytime soon, either.

While Team Woods finished in second, two shots back from John Daly and his son, the Woods still stole the show with not only their great play but also the little moments the two shared on the course.

The PGA Tour released a video showing just how identical Charlie and Tiger are with their golf mannerisms. It’s not just a 30-second video, either, it’s nearly two full minutes of Tiger and Charlie acting the exact same on the course.

The video certainly speaks volumes to the saying ‘your kids are always watching you.’

Now, some of these moves from both Tiger and Charlie are typical for any golfer, like standing on the green with your legs crossed, leaning on your putter, but this video takes things to a whole new level.