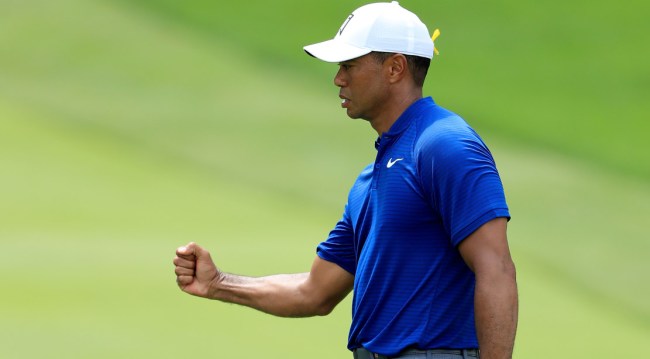 As of this writing, Tiger Woods was continuing the fine play he exhibited at The Open Championship at Carnoustie.

As of mywriting this, just past the halfway point of round one at the WGC-Bridgestone Invitational in Akron, Woods is 4-under after hitting six of seven fairways and eight of nine greens on the front nine, and this sick 50-foot birdie putt on the 18th hole.

A birdie from WAY downtown for Tiger Woods!

Eight-time champion, @TigerWoods is off to a fast start @WGC_Bridgestone.#LiveUnderPar pic.twitter.com/H18vxwTqSl

And sank another birdie putt.

Tiger gets it to 4-under. 🐦 pic.twitter.com/zPyR2AE3d5

But that’s not why I asked you here today. The reason you’re here is because a photo of Tiger Woods talking to Paul Casey at the WGC-Bridgestone Invitational was turned into a caption contest by The Golf Channel’s “Tiger Tracker” and one superb tweet about the big Thanksgiving day match between Woods and Mickelson won it all.

The winner? “I don’t even care man. I could lose 10 million and it wouldn’t come close to being my worst thanksgiving.”

“I don’t even care man. I could lose 10 million and it wouldn’t come close to being my worst thanksgiving”

Ain’t that the truth. That would be only about 1.3 percent of what he ended up losing after his Thanksgiving in 2009.