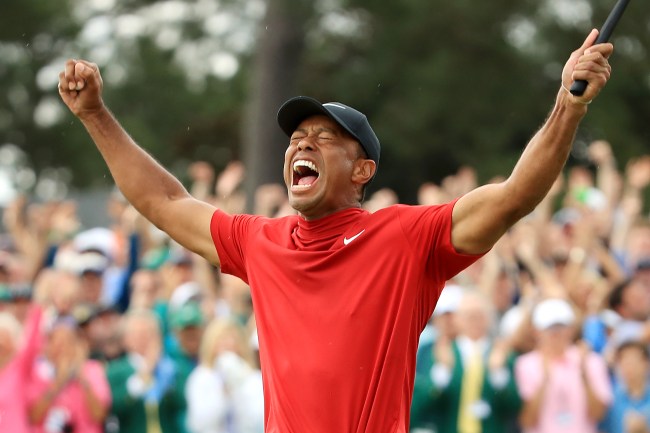 Tiger Woods is victorious once again.

This afternoon Tiger rallied on the final day of the Masters to collect his fifth green jacket and won his first major tournament in 11 years.

Tiger Woods wins the Masters for the fifth time, his first major title in 11 years and first Masters win since 2005 https://t.co/ohLllzYWNt pic.twitter.com/bLjUBZp3mo

"THE RETURN TO GLORY!"

Tiger Woods wins the Masters for the 5th time. pic.twitter.com/u3cNdQm6MG

After his win Tiger embraced his son nearly the same way he did with his father 22 years ago when he won his first Masters in 97.

It’s okay to cry 😭 😭Tiger hugs his son, just like he hugged his late father the last time he won in 2005 #MastersSunday pic.twitter.com/UkukrqcbSg

Everyone remembers Tiger’s hug with his father in 1997.

No one will ever forget today’s embrace with his son.

Even the security guard in the background got teared up during the father-son moment.

The gentleman working at the #TheMasters in the background tells you just how emotional it was for Tiger and those watching in close proximity of him hugging his son. If he’s not wiping a tear away, it must of been some dirt in his eye 😢. Great father son moment caught on camera pic.twitter.com/85bapjXiP8

Tiger Woods and his father Earl after his first Masters win in 1997.

Tiger and his son Charlie after winning his 5th Masters on Sunday. pic.twitter.com/uhGOd4eGYt