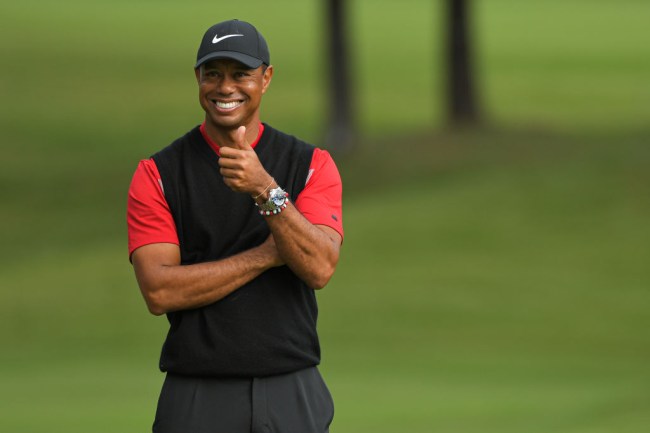 It’s no secret that Tiger Woods’ backyard is much nicer than your backyard. While we recently got a glimpse of his immaculate practice green setup, and his two four-legged caddies Bugs and Lola, now the 15-time major champion is showing off one of his new toys, an insanely high-tech putting simulator.

While you may have a $30 putting matt in your living room that your significant other absolutely hates, Woods has a futuristic new indoor putting simulator that actually creates certain putts while also drawing a line for alignment right on the green. These are the kinds of things you can get installed at your house when your career earnings are over $120 million.

Safe to say the actual putting green lighting up a line for you is far better than bringing out any chalk lines or alignment sticks. This is the sort of putting simulator you may see at the highest level of fitting centers around the world, but Woods has one all to his lonesome.

Woods recently teed it up at the Memorial for what was his first start on the PGA Tour since February. He managed to make the cut on the number before ultimately struggling on Sunday en route to a T-40 finish at 6-over. As of right now we don’t know when he will tee it up next, perhaps it’s next week at the WGC FedEx St. Jude Classic in Memphis or he could take the next few weeks off in preparation for the PGA Championship in San Francisco.