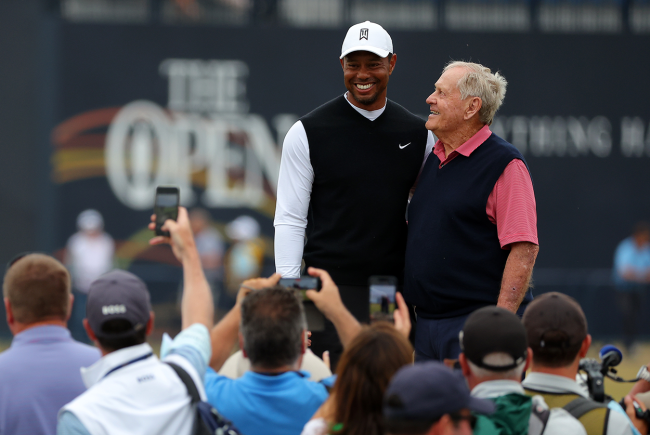 And to make the connection even more interesting, both Nicklaus and Woods won two of their three Opens on the Old Course at Saint Andrews. The historic course will also host this weekend’s tournament.

Woods, who pulled out of the PGA Championship after battling his way through the first three rounds, is back and made it very clear that he is not nearing retirement despite rumors throughout the week. He has said multiple times throughout his career how much he loves the Old Course and is hopeful to be in contention come Sunday.

Although imagining Woods hoisting the Claret Jug for the fourth time is difficult, it’s not impossible. The 46-year-old knows the course well and loves how it plays.

In addition, although he continues to walk with a noticeable limp, details from Woods’ first full, 18-hole practice round before a major since his car accident were ‘encouraging.’ He played better as the afternoon went on and is taking the upcoming Open very seriously. It was also encouraging to see that Woods was in good spirits during the round, ruthlessly trolling Justin Thomas with a big smile along the way.

Back out on the course on Monday, Woods took a day off without a full practice round and spent more time working on his putting and at the range.

He also made sure to enjoy the atmosphere, greet his fellow competitors and other golf legends. Jack Nicklaus was among those who Woods ran into on Monday and they stood together for a photo on one of the most famous bridges in all of sports.

As the two took an iconic photo, Woods established his dominance over Nicklaus with an alpha move. It was probably an accident, but Woods’ left foot stood firmly atop the left foot of Nicklaus.

To make things even more savage, though probably not on purpose, Woods was wearing metal spikes. He was really digging in on Nicklaus.

The two golfers are considered by many to be the two greatest in the sport’s history. Maybe it was on purpose and Woods wanted to let everybody know who is boss. Probably not, but you never know.