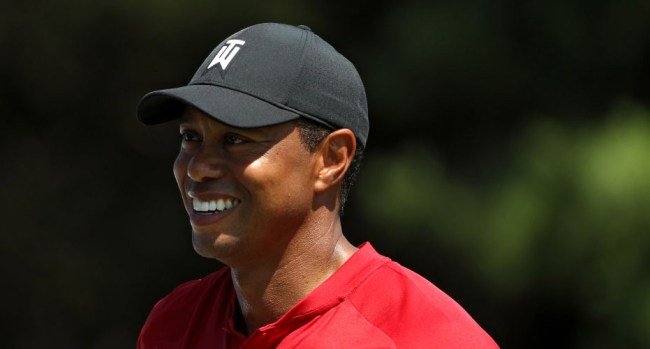 Tiger Woods sadly hasn’t been able follow up his great run at the 2018 PGA Championship with even more success in his last two PGA Tour tournaments.

Woods finished tied for 40th in The Northern Trust two weeks ago, and this past weekend at the Dell Technologies Championship in Boston he shot a 7-under-par 277 to finish in a tie for 24th place.

After the disappointing finish, Woods headed straight to the locker room, not speaking to the media for the first time all year. Tiger’s switch to his third putter this year prior to the tournament didn’t help him out any at TPC Boston as he needed 33 putts as part of the 71 he shot on Monday.

He now sits 25th in the FedEx Cup standings and finds himself in the somewhat precarious position of having to stay in the top 30 to qualify for the Tour Championship that takes place at the end of the PGA season.

All that being said, it wasn’t Tiger Woods that garnered the most attention this week in Boston. It was a guy in the crowd who bears a resemblance to Tiger Woods, especially considering the way he dressed for the Dell Technologies Championship’s final round.

Have to admit, he’s got the Tiger Woods Sunday golf attire look on lock.

Add in the fact that, of course, he was following Woods around the course on Monday and dude was a big hit with the fans.

The internet was also rather enamored with this gentleman’s look.

Tiger never smiles until he has defeated you… That's how I knew it wasn't him. https://t.co/ti25MUx4uQ

Wonder what Tiger thought of this moment, or if he was even aware of it…

@TigerWoods and his look alike after a birde on 11. pic.twitter.com/HHR2tLEa41