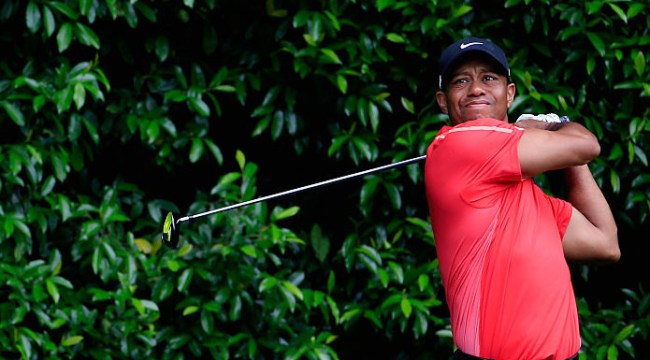 Tiger Woods’ awesome run at this year’s PGA Championship may have people *cough* sportsbooks thinking he is one of the front-runners to win the 2019 Masters, but just prior to the 2017 Masters Tiger himself thought he was finished with competitive golf.

Monday on The Dan Patrick Show, six-time Major winner and CBS broadcaster Nick Faldo told a story of how he overheard Woods telling someone at the 2017 Masters champions dinner that he believed that he was done with the PGA Tour because of his chronic back issues.

“What he’s been able to do is, it’s unbelievable, remarkable,” Faldo said to Patrick. “To go from a frozen back — I know he whispered to another Masters champion two Masters dinners ago ‘I’m done. I won’t play golf again,’ and here we are, 18 months later.”

Patrick, naturally wanted to know who Woods was talking to when he said this. Faldo wouldn’t spill.

“No, I won’t mention the name, but he’s a Masters champion,'” told Faldo. “He said, ‘I’m done. I’m done, my back is done.’ He was in agony. He was in pain. His leg, the pain down his legs, there was nothing enjoyable. He couldn’t move. If you watched footage of him, he couldn’t even get in and out of the golf cart at the (2016) Ryder Cup when he was a vice captain.”

Shortly following that dinner, Woods underwent his fourth back surgery, and a month after that he was arrested for driving under the influence, so to say Tiger was on the road back would have been very inaccurate.

“To turn this around, to get this spine fusion, it’s absolutely amazing. So, great on him and obviously great for golf,” said Faldo.