Fingers Crossed For The Sports Gambler Who Put An $85,000 Bet On Tiger Woods To Win The Masters 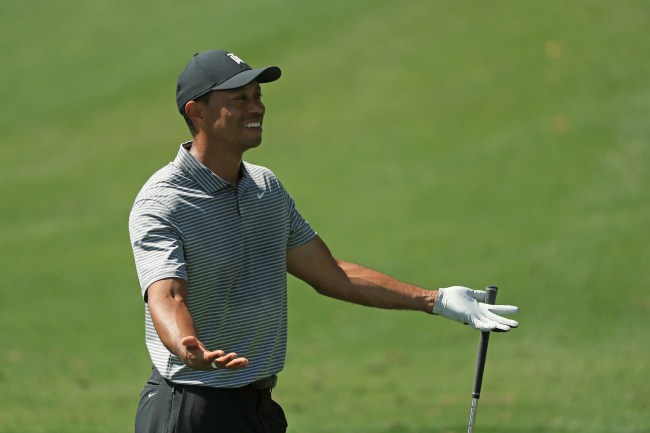 Tiger Woods hasn’t won a major championship since 2008’s U.S. Open, and he hasn’t won The Masters since 2005, but that hasn’t stopped one ballsy sports gambler from dropping a ton of money on the 14-time major champion to win this year’s green jacket. In fact, the person is so confident that the 43-year-old Woods will walk away from Augusta with the victory that they dropped an insane $85,000 wager for him to do it, per Darren Rovell.

Rovell first reported the news on the Action Network, and tweeted out some of the details. With Tiger Woods currently at 14-1 odds to win this year’s Masters tournament, the $85,000 sports gambler could win, get this, $1.19 million. That’s just insane, but, hey, you’ve got to go big or go home, right?

JUST IN: A William Hill sportsbook in Nevada just took an $85,000 wager on Tiger to win the Masters. At 14-1, pays out $1.19 million if he puts on another green jacket on Sunday.

According to the Rovell piece on Action Network, the $85,000 bet on Tiger Woods represents the largest single-liability on a golf bet for the William Hill sportsbook’s U.S. division, and singlehandedly bumped Woods’ overall odds as this year’s Masters from the 14-1 line to 10-1. That’s absolutely insane.

The director of trading at William Hill, Nick Bogdanovich, detailed how the wager went down, which included going to his boss since it was out of his pay grade, even as a director.

“When we were approached with this bet, it was above my pay grade, so I had to go to my boss. Because we have such a large Masters pool this year, we decided to take it.

“The public is really liking betting on golf right now,” Bogdanovich said. “If Tiger wins will obviously get toasted.”

That last part about Tiger Woods being loved by sports gamblers? Well, Bogdanovich added that Tiger now makes up roughly 25 percent of all the money the sportsbook has taken at its 100-plus establishments, with Rory McIlroy second at just around 7 percent.

As for the potential $1.19 million payout, if the sports gambler does end up winning because of Tiger Wood’s Masters success, the earnings would be about $20,000 more than Rickie Fowler made at Augusta last year for finishing in second place in the tournament. Whoever this person is must have extreme confidence that Tiger’s going to be roaring loudly all weekend, so we’ll have to see if they end up winning or pissing away a year’s worth of salary for some normal people on just one bet.