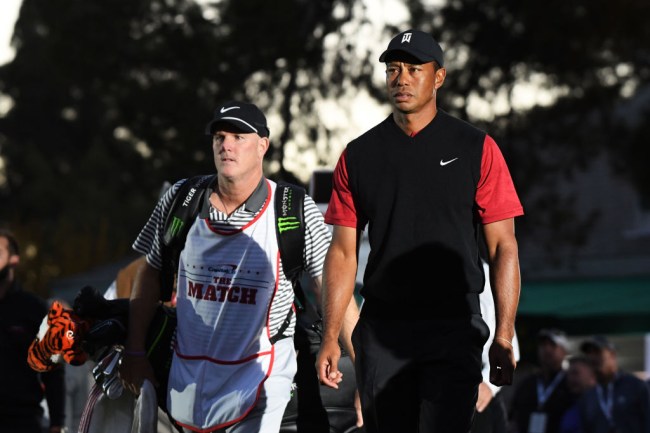 Harry How/Getty Images for The Match

Tiger Woods may have missed his chance at a $9 million payday by losing a head-to-head duel against Phil Mickelson this weekend, but you’d be naive to think that Tiger didn’t leave without some small victories.

Now, I was not going to report on this seeing as Tiger has a serious girlfriend named Erica Herman who he’s been dating for over a year. And more importantly, I ain’t no snitch. But I’m seeing a bunch of other outlets letting the Tiger out of the bag, and I gotta put food on the table for my family, so I shall do the same. Like the weak man I am.

GolfViral posted a clip from The Match that shows the golf icon shaking hands with an adoring blonde spectator, as he’s done many times before. But this interaction raised suspicion in that it appears that the attractive blondie handed Tiger what many believe to be a piece of paper with her number on it. Or maybe her hotel room number. I don’t know, maybe she was trying to coax out 2010 Tiger.

Tiger getting phone number in the middle of the match? 😂🤷‍♂️ pic.twitter.com/kEklvwZQbm

Certainly looked like an exchange was made there before Tiger threw his hands in his pockets. Slick.

When a group of kids want your autograph but you have a 6:00pm dinner reservation at Perkins pic.twitter.com/vJMFFHIE77

After considering all factors, I’d have to agree with this gentleman:

A Tiger can’t change its stripes.