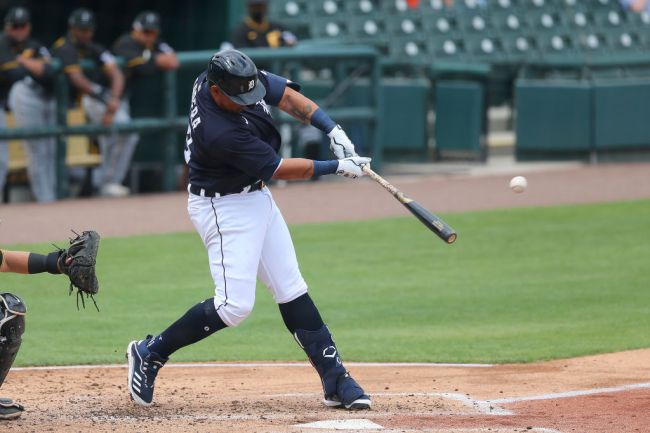 Spring training is almost over, but that didn’t stop the Tigers and the Phillies from getting into the most spring training play of the year. The result of the pickle finished exactly where it began, but the sequence that unfolded to get to that point is worth all 33 seconds.

It all begins with a bases loaded wild pitch in the eighth inning. As the pitch flies by the catcher, the base runner on third takes off down the third base line. However, the passed ball gets a perfect bounce off of the backstop and returns to the catcher not but five feet from the plate.

As the catcher quickly returns to the dish, the runner who started home reverses course and heads back— but the runner on second is already almost to third base. While the base runners try to return to their original position, the pickle ensues and the ball is thrown to second, then to third, back to the catcher, and back to third again. Meanwhile, both of the runners on second and third are caught in no man’s land at third base. When the second baseman, who ran all the way over to third to help cover the pickle, goes to make the tag, the ball is knocked loose and goes flying.

This is where things get hilarious. Instead of advancing home to score as the ball gets into the outfield, the runner on third stays put and the runner on second just heads back to where he began. All three runners end up exactly where they started and the complete and utter chaos ends in just a ball.

To make things even better, Detroit entered the eight inning trailing 8-1. Despite not scoring on the wild pitch pick, the Tigers went on to score eight runs in the inning and won the game 9-8. While an eight-run comeback would typically be an impressive feat, the inning featured only three hits, seven (!!) walks and a hit by pitch.

#Tigers have scored eight runs in the bottom of the eighth. Still only two outs.

Opening Day can’t come soon enough, but this ludicrous inning is a great reminder of just how beautiful baseball can be.