45-Year-Old Former No. 1 Pick Tim Couch Is So Jacked Now He Could Come Back As A Linebacker 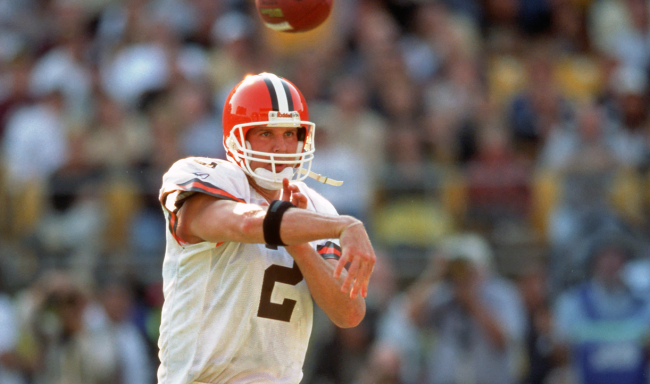 45-year-old former number one overall pick Tim Couch hasn’t played in the NFL since 2003, but now is so jacked he looks like he could make a comeback as a linebacker.

Following his being selected first overall by the Browns in the 1999 NFL Draft (he was the franchise’s first pick after being reactivated as an expansion team), Couch lasted just five seasons.

The 1998 SEC Player of the Year ended up passing for 11,131 yards with 64 touchdowns and 67 interceptions before suffering a rotator cuff injury that would require surgery. Attempted comebacks with the Packers, Bears, Bengals, Titans, Dolphins, Steelers, Texans and Jaguars all failed to come to fruition.

Now, after earning over $20 million in the NFL, Tim Couch has spent several years working as a color analyst for the SEC Regional Network football package.

He also, apparently, spends a lot of time in the gym.

Over the holidays, Matt Jones, host of Kentucky Sports Radio and co-owner of OVW Wrestling, tweeted out a photo of Tim Couch looking extremely swole. The 6-foot-4 Couch was listed at 220 pounds during his playing days. Now he looks like he’s pushing 250 and it’s all muscle.

I bet you think you are in pretty good shape don’t you?

Couch responded that he’s actually just 45-years-old, as if that has any bearing whatsoever on the fact that he hasn’t played for 20 years and looks to be in better shape than most current NFL players.

He also made a very dubious claim about how he got so ripped.

Related: 50-Year-Old Former NFL Kicker Adam Vinatieri Is Now So Yolked He Looks Like A Lineman

This isn’t the first time that Tim Couch has shown off his very impressive physique on social media. Back in August of 2021, he shared another shirtless photo with the caption, “Might make a comeback like Tebow. #gobrowns.”

Couch was named to the 2023 ballot for induction into the College Football Hall of Fame. It is the tenth straight year that he has been on the ballot.

You can receive a vote by joining at https://t.co/qSwkgLEyFo

In his sophomore and junior seasons at Kentucky, Couch passed for over 8,000 yards, completing an astounding 72.3 percent of passes in his final season (he once completed 44 of 53 passes in a game) before declaring for the NFL draft.