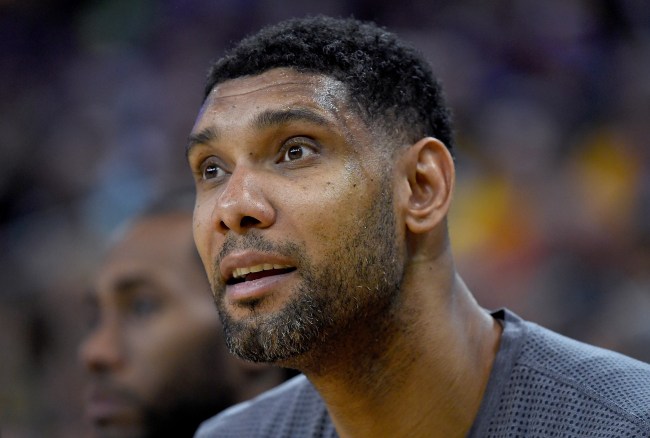 Tim Duncan has never been what you called wild. Sure, the San Antonio Spurs legend and two-time league MVP probably showered teammates in champagne after all of his five NBA titles, but, for the most part, most people associate “The Big Fundamental” with being boring, reserved, bland and, well, you probably get the point.

Here’s the thing, though: Tim Duncan got cool after retiring from the NBA in 2016 — or at least he’s making me think he did. That’s because the big man went out and grew himself some mini dreads, showing the world that, deep down, there’s a personality somewhere in him. Take a look at some of the pictures that surfaced on the Internet recently of Duncan and his new do.

What in the actual f*ck is going on here? It’s like the universe reversed itself and made Tim Duncan cool of a sudden. Remember, bros, this is the same guy who used to show up to games wearing tucked in button-down plaid shirts, which made him resemble a 60-year-old man than one of the best power forwards in NBA history.

Rocking my new shirt and belt to the game tonight. Danny asked me where i got them from. I told him Old Navy. pic.twitter.com/z8etVAkVXR

With so many people used to Duncan’s boring ways from when he played, Twitter couldn’t control itself after seeing the newly dreaded hoops legend. Here’s some of what people were saying as reactions.

This is the most flashy shit he’s ever done lol

My mind is completely blown. It’s like everything I once believed was a lie, and Tim Duncan has gone off to beat some ass in karate while rocking dreads, maybe smoke some pot and play in a jam band. It doesn’t make much sense to me, but, hey, at least Duncan’s losing the perception of being the world’s most boring person, so that’s a good thing for him. Maybe it’s just a mid-life crisis that will pass in due time, or maybe he’s really the coolest MFer to ever grace planet earth and he was hiding it all along?